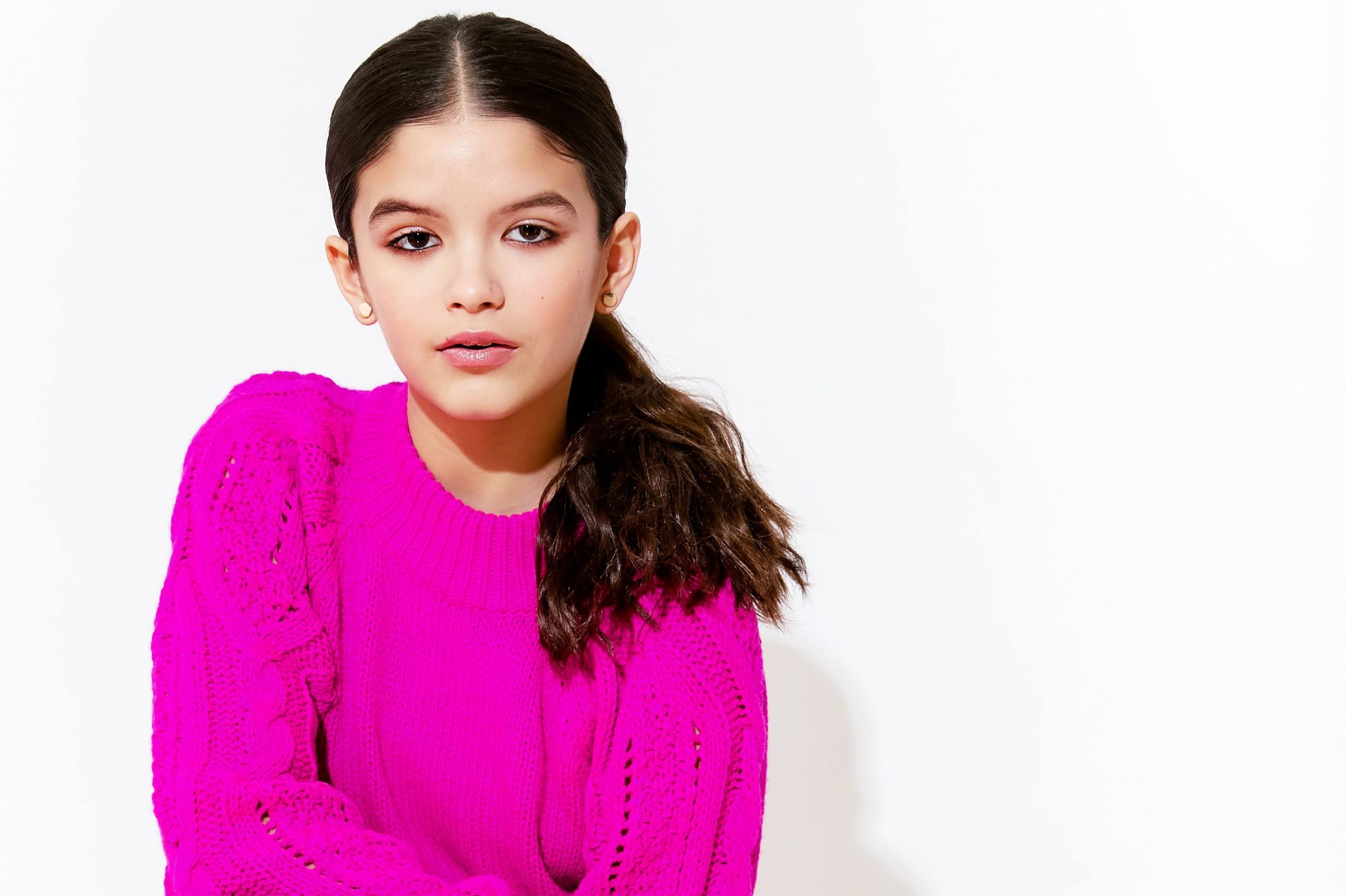 On Christmas Day, Netflix dropped the highly-anticipated We Can Be Heroes directed by Robert Rodriguez. Created as both a stand-alone and a sequel to The Adventures of Sharkboy and Lavagirl, the movie sparked excitement when we found out that Sharkboy and Lavagirl would grace our screens once more. Alongside the return of Taylor Dooley as Lavagirl, Pedro Pascal, Priyanka Chopra, Sung Kang, and Christian Slater brought in some more excitement as we slowly discovered more about the movie. 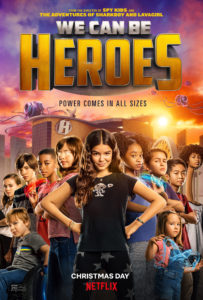 However, like the theme of the movie, the power of We Can Be Heroes lies in the kids. Aliens invade Earth and the Heroics resort to attempting to save Earth the same way they usually do despite knowing that the plan isn’t working or going to work this time around. Which leaves their children to have to come up to the plate. It’s a movie that puts the children of the Heroics front and center.

YaYa Gosselin plays Missy Moreno and while she comes from a heroic family, she finds herself caught in the crossroads of growing up around heroics but without any of the powers. The role came to YaYa from her manager, but learning about who Missy was is what drew her in to audition. “I really perked up because the role of Missy was for a half-Hispanic girl between 10-12 who was the daughter of a superhero. I love comics and I’m half-Hispanic. I was 10 years old at the time and truly felt like even though I was on the younger side of it, the role was meant for me,” YaYa exclaims.

The process of making Missy really taught me how truly strong I am.

It turns out that she was right. After she booked the part of Missy, she received the full script and saw just how much she related to her. “I really liked her because she was very independent and strong, and I had a lot of respect for her,” she says. “It’s not easy being the new girl.”

Missy looks at herself as a loner in some ways as she attempts to figure out where her place is. And yet, she’s a natural-born leader before she even realizes it. “While [her father] Marcus Moreno is the leader of the Heroics and she even has a super-strong example of leadership in her grandmother, something tells me Missy’s strength and leadership comes from her mother who passed away,” YaYa explains adding that she hopes the future of We Can Be Heroes includes more on who her mother was. 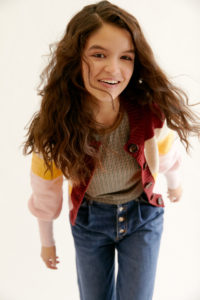 “The process of making Missy really taught me how truly strong I am,” she looks back. “It might not seem like it in the film, but I was only 10 when we filmed this movie and most of my castmates were 12 and 13. It was challenging and a lot of hard work and responsibility and I really grew and matured through the process.”

It’s something the characters similarly go through. They all start off the movie in the Heroics Headquarters with the expectation that they need to be protected and shielded away while their parents save the day. Then, they quickly see their parents get captured and it feels like all hope is lost. The children of the Heroics all know their powers, but they don’t all know how to be a team or what saving the world entails. That is until Missy decides that they need to take matters into their own hands instead of relying on the adults to do something.

“I hope kids are inspired to harness their powers and step up amongst their peers into leadership roles. We are the future and we are more than capable to be kinder and wiser than the current generation,” YaYa says about what the younger generation can take away from this movie. As for the older generation? “I hope adults will listen to us more. We are young, yes, but we are also more open and inclusive and we also have great ideas!”

I hope kids are inspired to harness their powers and step up amongst their peers into leadership roles. We are the future and we are more than capable to be kinder and wiser than the current generation.

The movie shines a light on this as well. The children of the Heroics see all the things their parents do wrong as Heroics and what they should do differently. But it’s not until they’re together and coming up with a plan to save their parents that they get to express the ways in which their parents aren’t as efficient as everyone praises them to be. “I hope that my generation is kinder and more inclusive than the current generation. Everyone spends so much time trying to be right and no one listens to each other anymore,” YaYa shares. She also hopes that this movie gets to make room for more superhero movies where kids get to be the heroes. “Most superhero movies are made with adults and teenagers, but I think it’s important for kids to see themselves in that way.”

It’s something that director Robert Rodriguez has seemed to always know and center in his work. It’s the reason so many of us grew up watching Spy Kids and The Adventures of Sharkboy and Lavagirl. Aside from his ability to build movies inside these creative and colorful worlds and fill them with action and adventure, those movies became staples for so many of our childhoods and beyond because we got to see kids (who were and looked their age) saving the day.

“It was the greatest honor of my life so far,” YaYa says about working on this project. “Robert is truly incredible. His imagination is unmatched and he does everything his own way. He always works with the same crew and being there makes you feel like you are a part of his family. His kids were on set every single day working closely alongside him,” she shares. “It was such an amazing experience and even though I am only 11 and have a lot ahead of me, I know that I have already experienced one of the most magical movie-making experiences of my life.”

This includes the cast she got to work with. One of them being Pedro Pascal who plays her father Marcus. “Pedro is a lot of fun on set. I was constantly laughing when I was around him.” Their relationship is one of the first dynamics we see in the movie. After the death of her mom, the two make an agreement that Marcus will stick to desk work instead of joining in the action. But when he’s forced to go into battle with the rest of the team, Missy gets to see one of the ways he puts his leadership skills to work. “I think we really wanted to portray that Marcus really wants to protect Missy. She has already lost her mom and he didn’t want anything to happen to him because then she would have no one,” she explains.

There is hope. We are not powerless and things are going to get better. 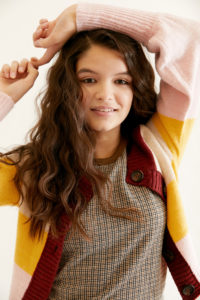 The bulk of her scenes, however, was with the other children of the heroics. It’s one of the first projects YaYa has gotten to work on where she was predominantly working with people within her age range. “I met some of my best friends on the set of Heroics. We arrived in Austin two weeks before we started filming so we had some time to bond! We were all staying at the same hotel with our families so sometimes it was a madhouse,” YaYa exclaims. In terms of filming, she says that she had a lot of fun playing off of Andy Walker who plays Wheels and Isaiah Russell-Bailey who plays Rewind. “Missy and Wheels have a lot of dialogue together so we got to work together a ton. Andy is just one of the funniest people I have ever met and Isaiah made set so fun,” YaYa exclaims. “He is a total prankster and kept us all laughing.”

The cast got to bond in so many different ways from being on set together, to all staying in the same hotel, and also having two weeks of stunt and martial arts training which resulted in YaYa getting to do all of her stunts. “I come from a dance background so it was all new to me but it was so much fun! Working with harnesses was definitely the best part!”

However, action and doing stunts aren’t what makes a hero. When I ask YaYa who her hero is and what goes into being a hero for her, she reflects on her grandpa who she says was and is her hero. “He actually came to visit me in Austin a few times while we were filming. He got sick halfway through production and was diagnosed with stage 4 pancreatic cancer. He passed away just a week after filming wrapped,” she shares. “He is truly the reason I am where I am today. He took me to acting classes and auditions while my parents worked. He helped us to go to LA many times for auditions and callbacks. He even drove me and my mom to LA from Dallas once,” looking back fondly on the ways in which her grandpa encouraged and looked out for her, she wishes he could see the movie, but she says that she knows he’ll be watching, “from the best seat in the house.”

It explains why when she was asked during filming what power she would want, she said the power of healing, and it’s something that she still stands by. “After losing my grandpa and now with the pandemic, I really feel even more strongly about that answer,” she exclaims.

As we look back on this year while preparing for 2021, We Can Be Heroes offers a moment of joy and excitement. “We Can Be Heroes is such a fun movie. It’s full of action and humor and I love the colors and special effects,” YaYa says about why she thinks it’s the perfect movie to close out 2020. “But honestly, the message of our film is exactly what 2020 needs. There is hope. We are not powerless and things are going to get better.”

You can stay up to date on all things YaYa Gosselin by following her Twitter and Instagram accounts.

We Can Be Heroes is now streaming on Netflix.