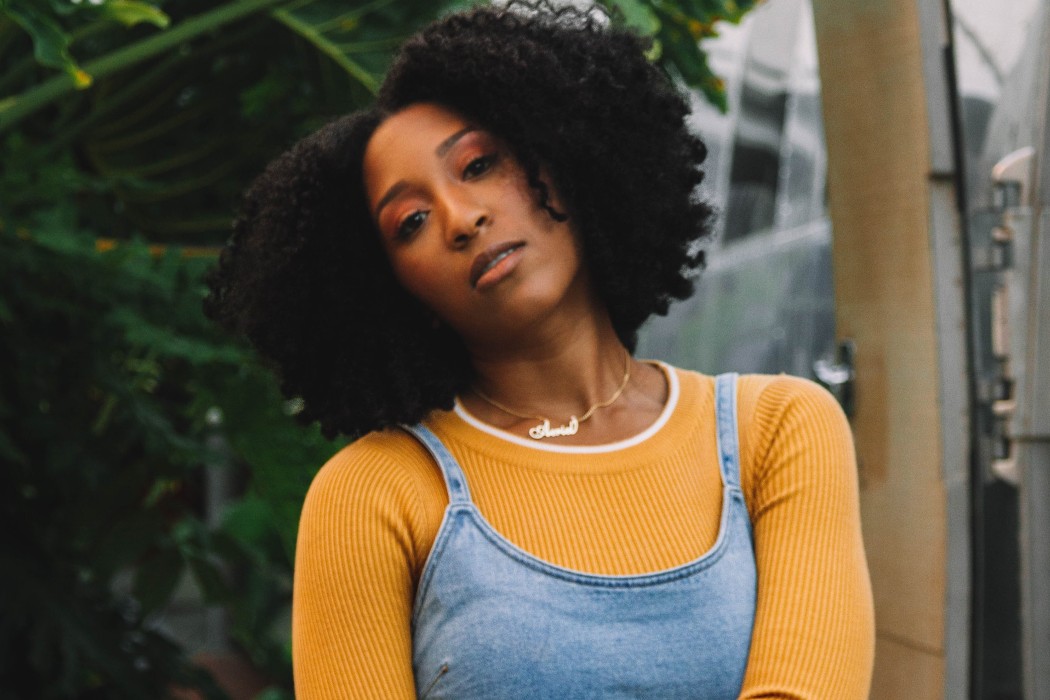 Finding your voice in an industry where what you have to say and how you say it is a big part of your job can be stressful. It requires you to come into your own in a way that is a little more open and vulnerable than usual. But, it can also be liberating. Finding your voice in an industry that relies on you standing out when you’re so used to being shy and standing in the background can spark a sense of freedom and a chance to release your sense of expression that you’ve been holding in for so long.

For singer-songwriter Aeriel, she realized her love for performing at a young age and began writing and looking into producing at the age of 13 but it wasn’t until a few years ago that she allowed herself to share that part of herself.

“I wrote a lot of songs about middle school crushes,” Aeriel laughs when looking back on her songwriting when she first started out. “I still have a journal from middle school full of old songs and poems and honestly, a lot of them are really silly and not that great, but I held onto it because it reminds of how far I’ve come already.” Since then, as a songwriter, she’s grown on a technical level and a creative level; learning how to craft ideas and stories into her songs, Aeriel has incorporated different tricks playing around with rhyme patterns and language to make her songs more complex.

“At that time, I didn’t know anyone who did music, so it really just stemmed from me desperately wanting to create and taking it into my own hands,” she says when I ask her if she remembers what made her fall in love with music enough to create it. “But at that age, I just wasn’t confident enough to put myself out there.”

Many times growing up, I didn’t speak up because I thought my feelings weren’t valid or that I wasn’t enough.

She admits to being very shy and quiet growing up which kept her from sharing her music until she felt comfortable enough to share what she had to say. “That really just came with accepting who I am as a person and gaining more confidence. Many times growing up, I didn’t speak up because I thought my feelings weren’t valid or that I wasn’t enough,” Aeriel reflects about how she found her voice. “Especially in the social media era where we showcase our highs and bury our lows. But, opening up just taught me that there are universal truths and struggles a lot of women deal with but still don’t openly discuss and your vulnerability can truly be a gift to someone else.”

A few years ago, Aeriel performed her first performance featuring original songs that made her realize an impact that her music could have on people. “The venue was really small, maybe only twenty people or so, but it was just amazing to me to see people enjoying something I created,” she says about the performance.

Putting her all into her music, Aeriel admits that at this point all of her songs are very autobiographical stating, “It’s really my goal to present a body of work that really represents who I am as a creative and as a person.” One example is her debut single, “Be Down” that she released at the end of last month along with a music video. “I wrote ‘Be Down’ after getting out of a not so great relationship that mentally I knew wouldn’t work, but emotionally I was still tied to the relationship. It left me feeling frustrated with the whole dating scene.” Talking to her friends and getting their perspective on the matter is what led her to write about it. The inspiration for the video that accompanies it came a little differently with the help of director Lex J. who helped her develop a concept that was reflective of her life growing up in LA.

It’s really my goal to present a body of work that really represents who I am as a creative and as a person.

“I really hope [‘Be Down’] showcases the heart and effort I put into my artistry and I hope that people can relate to it. That’s really what its all about even if it only touches a few people,” she says. “I think we’ve gotten to a point where it’s become trendy to ‘not care’ or ‘have no feelings’ and at a certain point, it really can be counterproductive. I hope my music would inspire people to be authentic to themselves and to not be afraid to admit what they want and go after it,” she starts when I ask her about what she wants her music to convey. “As far as the industry goes, I plan to do the same as what I practice in my regular life; work hard and lead with kindness and hope that it inspires others to do the same,” she continues.

Her EP which is set to release very soon shows that Aeriel is working to destigmatize expressing emotion, especially for young women. Titled Sad Girls Club, the five-track EP is completely written by Aeriel with Corey Michael and Godflow as producers. “I tried to play with different lyrical styles and sounds while still making a cohesive body of work. As a new artist, you never really know what will resonate with people, as well as what will move a live audience so I’m excited to see people’s reactions and take it all in for the next project,” she shares already thinking ahead.

“I found myself noticing when I was writing this EP the many times I’ve tried to convince myself I was not upset or that certain situations ‘weren’t so bad’ because someone else told me I was overreacting. And unfortunately, there are so many women who, like me, are not able to be heard without the fear of being belittled or judged especially in relationships,” Aeriel explores the meaning the title Sad Girls Club has to her. “Vulnerability and being real with yourself is really the first step to self-care and peace so to me, Sad Girls Club means owning how you feel whether it be sadness, anger, or even positive emotions and not running from it or letting anyone invalidate you.”

I found myself noticing when I was writing this EP the many times I’v tried to convince myself I was not upset or that certain situations ‘weren’t so bad’ because someone else told me I was overreacting. And unfortunately, there are so many women who, like me, are not able to be heard without the fear of being belittled or judged especially in realtionships.

“The songs on this EP have chronicled the relationships I’ve had over the past year both romantically and platonically so there is a range of emotions. But, the number one charge I gave to myself when writing was to not be afraid of owning how I feel and I hope that’s something listeners pick up on and practice in their own lives because truthfully, anyone who invalidates your feelings and aspirations isn’t worth keeping around anyway,” she continues. 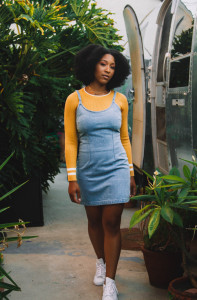 When I ask her if there’s a song that she’s written that she’s most of or that surprised her, she mentions a yet to be released song from the EP titled “Motion.” “It was one of those that just flowed when I was writing and it came together very quickly,” she expresses excitement about the song. Not giving too much away, Aeriel explains that it’s one of her favorite songs she’s made and she can’t wait to share it.

Because her music is so personal and based on real-life experiences and feelings, she starts writing once, “inspiration hits with pen and paper, independent of any music or tracks.” After she’s written the message that she wants to express before working on the melody, chords, and lyrics to bring to her producers. “It’s been great, but definitely a whirlwind of emotions,” she exclaims when I ask her what it’s been like finally getting to release her music. “There’s a lot of work and hustle that goes into being an artist, especially in these early stages but it’s truly my passion and I feel blessed to be able to chase my dream. I think my younger me would definitely be proud.”

When it comes to those broad topics such as feminism or whatever it may be, I find myself living and writing by example. Which means showcasing those principles and what they mean to me in my everyday life and writing in addition to vocally speaking up.

Coming into her own and embracing the power that she has as an artist, Aeriel is aware of what that means for her personally. “When it comes to those broad topics such as feminism or whatever it may be, I find myself living and writing by example,” she explains about how she’s incorporating important social issues into her way of being. “Which means showcasing those principles and what they mean to me in my everyday life and writing in addition to vocally speaking up.” Acknowledging the backlash that can often come from standing up for marginalized groups especially when you’re apart of that group, Aeriel explains that for her, the job is about continuing to grow and helping others grow. “Unfortunately, feminism is still a very polarizing topic and it mostly stems from a lack of understanding. So, it’s important not only to speak up and educate but live by your words.”

1. While We’re Young by Jhene Aiko-
2. Love Galore by Sza
3. One I Want by Majid Jordan
4. Everybody Knows by Kimbra
5. The Way Life Goes by Lil Uzi Vert
6. Biking by Frank Ocean

Be Down is available on iTunes, Spotify, Apple Music, Soundcloud, and Google Play. You can watch the music video here.

Prior to her recent album release, singer-songwriter Ruthie Collins spoke with Teenplicity to reflect on her journey in music and personal projects. A sweet,…