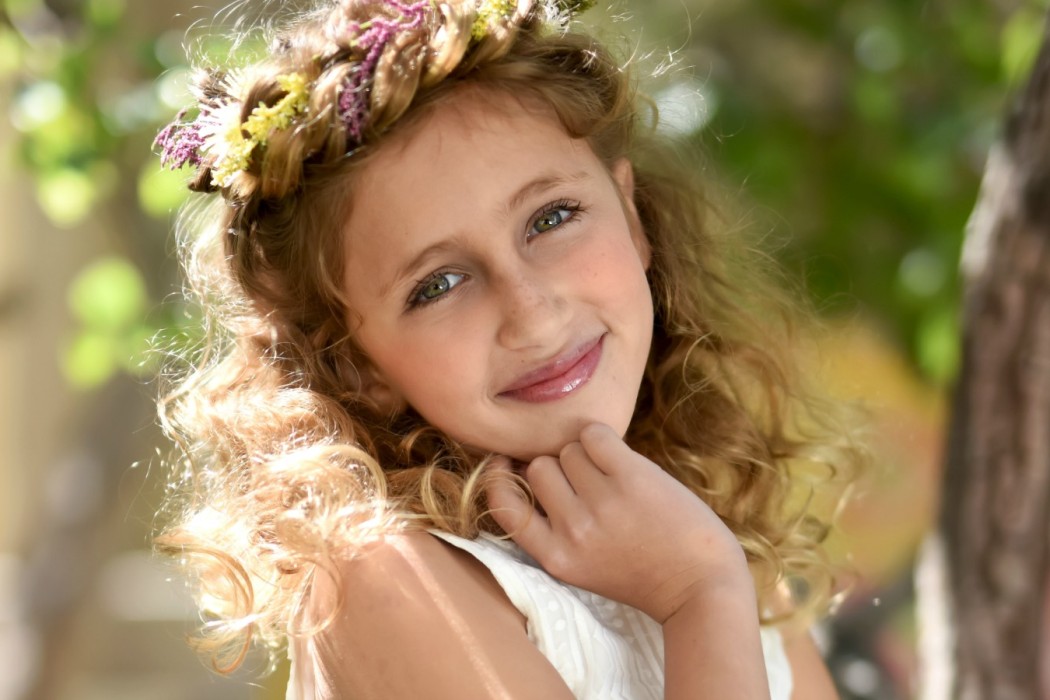 It’s a Wednesday afternoon in May when I get on the phone with nine-year-old Ava Kolker and her publicist to discuss season three of Girl Meets World. She perks up saying that she’s good when I ask how she’s doing and she returns the question. A bubbly and energetic young girl, she plays the role of sassy, diva and girlfriend of Auggie Matthews (August Maturo), Ava Morgenstern. Our conversation ranges from her talking about her character, to balancing school and acting, LA Fashion Week, and even a little bit about Earth’s most mightiest heroes, The Avengers. 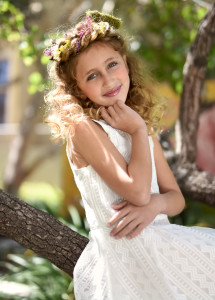 Viewers of Girl Meets World usually see Ava Morgenstern when she prances into the Matthews apartment belting out the lyrics to her self-sung theme song, “It’s Ava Morgenstern!” A song that Ava says was planned by the creators of the show but that she was allowed to add flair,”They planned it for me but I did all the dance moves and I made it my own. I added my feeling to it and I added my character to it. I do that with everything I do.” And after she prances in, often much to Topanga Matthews (Danielle Fishel) dismay, Ava steals the scene with whoever she interacts with. “I’d like to kind of interact more with Cory (Ben Savage),” Ava told me when I asked her about a character she’d like to have more scenes with, “I mostly interact with Topanga, as you know, but I’d love to interact with both of them.”

This season, the character of Ava goes through character development which has been Ava’s favorite part of working on season three, “Well, just to see my character have all the changes and the different reactions and emotions and costumes and it’s fun just changing every season and yeah!” Ava’s also excited about the return of a favored Boy Meets World alum. “I love having, from Boy Meets World, Rider Strong,” she answered about her favorite guest star of the season. “He directs and guest stars. I like that he comes back every now and then and I like that I get to work with him.” I followed up asking if Shawn Hunter was her favorite character from the original series to which she replied, “I’ve only watched a couple episodes, but I loved all of them. Him and Cory were the funniest. And Topanga!”

As for what she wants to see from her character this season? “Well, I want to see her interact with Riley and Maya, I’d love to see that happen.” When her publicist asks how she would like to see it happen, she responds, “Maybe us having something in common or having a conversation about our lives.” We all come up with the concept of something similar to a girls club or as Ava describes it, “just girl stuff.”

Ava originally received her role on Girl Meets World after auditioning to play first, young Maya Hart (Sabrina Carpenter) and then, young Riley Matthews (Rowan Blanchard). She then met with the writers who created Ava Morgenstern for her. And while they aren’t exactly the same person, both Avas share a similar energetic vibe. “Yes I am, I’m feeling really comfortable playing Ava, very, very comfortable,” Ava gushed about if she was able to see a little more of herself in the character. “Now, it’s just very easy for me to convert from me to her because I’m just so used to playing her and I feel so comfortable with all the cast members around me.” She explained that the Girl Meets World cast is a family on set with Ben and Danielle being the parents. Earlier in the interview, Ava quickly answered that if she could take anything from the set home with her, she’d take her cast members. “So that’s the one part that’s helped me through my journey on the show; the support from my cast members on the show and my family.”

I also got the chance to ask her what she described as the hardest question she’d ever been asked; If she could play any character ever, what character would she want to play? “The one character I’d ever wanna play would probably be one of The Avengers,” she answered after giving it some thought. And while at the time of the interview, she hadn’t seen the latest Marvel movie, Captain America: Civil War, she really wants to, “My mom and my sister aren’t too into it, so me and my dad might sneak out and go watch it like we did with the last one!” She giggled as she told me. Her favorite Avenger, however, is actually The Hulk aka Bruce Banner (Mark Ruffalo), “I really like The Hulk because he just lets his feelings out, but they’re all incredible.” 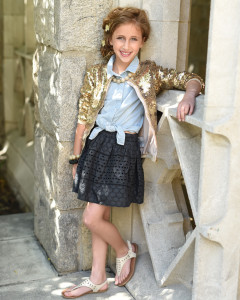 Like just about every other nine-year-old, Ava also goes to school which may seem impossible with her busy schedule, but thanks to the amount of support in her life it’s difficult, yet, doable, “It’s kind of hard doing both because it’s a lot. And I have to make it up on set like there are set teachers that tutor me and my teacher gives me the work ahead of time for me to do on set. So that’s very helpful.” I asked her if she had a favorite subject in school which prompted us to bond briefly over our shared love for math.

Ava has also recently modeled in her second LA Fashion Week, “My favorite thing about LA Fashion Week was that…well for walking, it’s that at the end, I get to pose and just let my feelings come out of me and all that work to get ready and all those hours. It’s just fun getting to do that one pose. And then my favorite part about LA Fashion Week is that afterward I get to get comfortable in my pajamas and cuddle with my family and thank them for my support.” Of course, me being the clumsy person I am could never picture a nine-year-old me modeling on a runway as fierce as she does it so I had to ask if it ever gets scary, “Not really, if you trust yourself it’s not at all, but if you get nervous, sometimes it can be a little scary to model.”

Speaking of scary, Ava has worked on quite a few horror and thriller projects including American Horror Story, Miss Meadows, and an upcoming project titled Message from the King alongside Chadwick Boseman and Olivia Munn. “It depends where it is it or what’s happening,” She responded about working on those kinds of projects. “I have to just be that character and be scared, but sometimes, she laughed as she said this next part, “I actually am kind of scared.” I followed up asking if she watches scary movies herself which she replied, “Well, yeah! Well, sometimes. If it’s late at night then no because it gives me nightmares, but like in the day sometimes I watch them with my big sister.”

Closing out our interview, I asked her about her favorite songs to sing and dance to, “I love singing and dancing to ‘Shake It Off’ by Taylor Swift and ‘Blank Space’ by Taylor Swift. I love Taylor Swift,” She exclaimed before continuing. “I like Justin Bieber’s song ‘What Do You Mean?’ I like that song to dance to and sing. And I like to sing ‘This girl is on fire!!’ I love that song it’s my favorite.” She answered belting out the lyrics to ‘Girl on Fire’ by Alicia Keys.

Ava is currently hard at work on the new season of Girl Meets World, but the adorable young star can also currently be seen in Buffalo Brothers commercial currently on the air and Message from the King which is expected to be released late 2016.