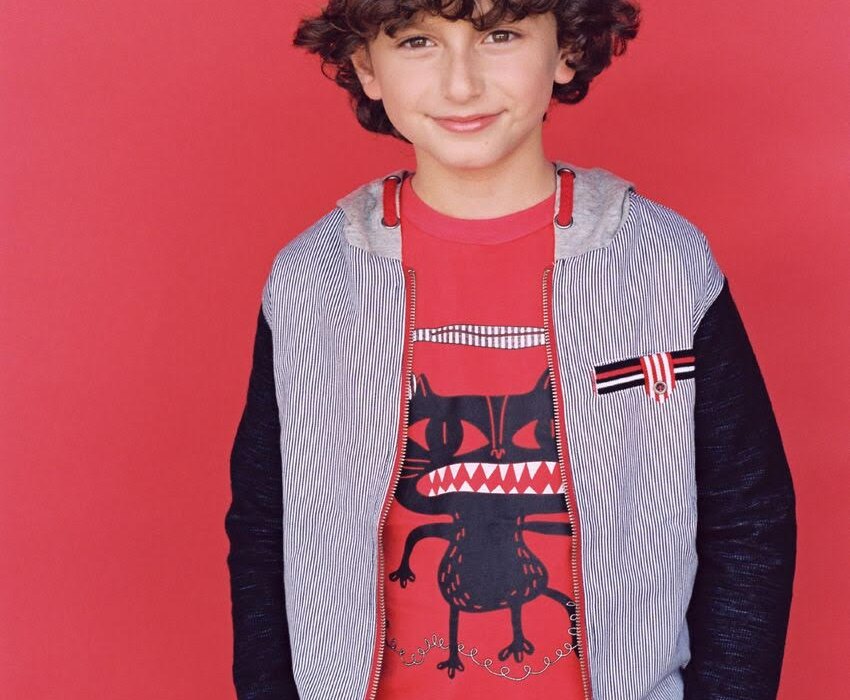 When Teenplicity last spoke with August Maturo, the young actor was traveling to Neverland as Michael in “Peter Pan and Tinker Bell – A Pirates Christmas” at the Pasadena Playhouse. Since then, the show has wrapped and August has reunited with the rest of Girl Meets World cast to continue working on the third season of the show.

Very proud of the play, August was sad to see it wrap as he loved doing theatre and loved everyone there. At least having Girl Meets World costars Sabrina Carpenter and Corey Fogelmanis along for the ride made finishing the play easier.

When season three began filming earlier this year, what August was most excited to see was for everyone to see how big he and Ava [Kolker] had gotten. “Ava and I were so little in season one. I was only six and she was seven! We’ve grown up together on this show.”

As for how season three is coming along so far, he boasts, “The new season is our best one yet!”

Fans will be able to expect lots of adventures in season three. “Auggie’s old friends (Ava & Doy) and Auggie has new friends this season too,” August spills to us about what’s to come for his character. He says that fans will love to see the teenagers in high school as well, and that they will enjoy the “cool guest stars” throughout this season too.

The season three premiere, airing this Friday, is broken into two parts which are coincidentally some of August’s favorite episodes, as well as ‘Girl Meets Jexica’.

“I love my stories in those [episodes],” he says. “I also love ‘Girl Meets the Great Lady of New York’. Auggie has a new friend, and Ava is so funny too.” But if you were to ask him were his all-time favorite episode is so far in the series, he picks the season one episode ‘Girl Meets Brother’.

If you asked fans, however, they probably wouldn’t be able to narrow down their favorite episode that easily. Despite that, they are all able to agree on one thing – their unwavering support for the show.

“I love the fans,” August gushes. Speaking directly to the fans, he says, “When you post pictures or tweets, we want you to know we try to read everything. We read all the nice things you say and it means a lot to us.”
Fans of Girl Meets World came out in masses when Teenplicity inquired if they had anything for ask August. They absolutely flooded the Twitter and Tumblr pages with creative questions that it was hard to only pick a few!
When Tumblr user “lucayaf” asked what August would take home from the Girl Meets World set, if he could, August answered, “I want the whole set! I would take it and put it right next to my real house.”
Another Tumblr user “sabrinacarpenterofficial” was curious if his character wasn’t already named ‘Auggie’, what would August want him to be named. “Ocean!” August replies, taking on the name of his little brother.
Speaking of Ocean, Twitter user @Lais_rocha1D asked August what he would pick his younger brother’s role to be if he ever gust starred on the breakout Disney Channel show.
“Flashback Auggie or Maya’s half-brother!” he exclaims. Then he ponders, “Or maybe Auggie’s cousin?”
Until Ocean gets his chance to shine alongside his brother, fans will be able to get excited about a few guest stars appearing this season on Girl Meets World.
August reveals that Luke Benward and Ashley Argota guest star in ‘Girl Meets High School’ parts one and two. In addition, Uriah Shelton who plays Uncle Josh will be coming back to visit the rest of the Matthews family this season.
With all the amazing guest stars joining the cast for an episode (or a few) life on set is so much fun, according to August. “We all laugh a lot.” However, his favorite person to hang out with on set isn’t actually a person. “We have a dog friendly set so the cast & crew bring their dogs a lot to set. I love playing with the dogs! My cast mates are fun too,” he concludes with a laugh.
For now, August is busy working of season three of Girl Meets World. “But there is some exciting things coming up, and I can’t tell you yet. You’ll have to wait and see!” he announces.
August is a regular kid off of set though. He goes to a regular school on the week when he’s not filming and he plays little league baseball.
“We just won the championship!” he cheers.
—
‘Girl Meets High School: Part 1‘ airs this Friday on Disney Channel, followed by Part 2 this Sunday.
Check out our last interview with August here!