The newest play at the Pasadena Playhouse is “Peter Pan and Tinker Bell – A Pirates Christmas”. The play, which just completed its opening weekend run, centers on the classic favorite characters in a new adventure through Neverland.

August “Auggie” Maturo plays Michael Darling in the show with some familiar faces playing his siblings. Wendy is played by Sabrina Carpenter and John is played by Corey Fogelmanis.

“We feel like a real family!” Auggie says. “There are funny pirates and amazing music and dancing. The lost boys dance amazingly! And Kevin Quinn is Peter Pan and he is SO GOOD!” he enthused. “Chrissie Fit is Tinker Bell and she speaks Spanish and is funny.” He goes on to say that Captain Hook (John O’Hurley), Smee (Parvesh Cheena) and Tiger Lily (Nikki Soohoo) are great as well. ”We have an amazing cast!”

Speaking about his role of Michael, Auggie says, in addition to being the little brother, “I have my teddy bear of course, and Peter Pan takes us on an adventure!”

“Pixie dust!” Auggie exclaims, when talking about what fans should look out for in his favorite scene. “That’s all I’ll say!”

“I love the old Disney movie, and I probably watched it a million times,” says Auggie. Spilling a small secret, he tells Teenplicity, “When I was little, I used to call Tinker Bell ‘Jingle Bell.’”

Auggie says working with Corey and Sabrina outside of their hit Disney Channel show “Girl Meets World” is amazing. “It just makes everything easy and fun. I love that I get to be their little brother! When we hold hands or hug, it feels natural and real because we really love each other like a family.”

Of his favorite lines on the show, Auggie mentions the “Jenny Lewis LLLOVES ME!” exclamation from the show. He also says that his character has “great funny things in STEM.” Auggie says, “You have to wait and watch!”

“Maybe someday Auggie will bring home the mysterious Jenny Lewis?” Auggie hopes for in the future of “Girl Meets World”. “Or maybe we will find out about his podcast that he talks about to Lucas in ‘Girl Meets Texas Part 3.’”

Considering the fantastic actors on the current show as well as its predecessor, there is one in particular that Auggie would love to work with more.

“I want scenes with Rider Strong!” he confesses.

If Auggie could send a message to his fans, it would be, he says, “I would like to thank the fans for being so amazing and loving “Girl Meets World” so much. I also want to tell them to COME SEE PETER PAN AT THE PASADENA PLAYHOUSE!”

“Peter Pan and Tinker Bell – A Pirate’s Christmas” is performing live at the Pasadena Playhouse now through January 3rd! 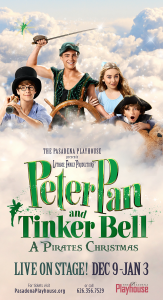 It feels almost impossible to me to have lived through 2020 and not constantly want to be screaming. If the want is not constant,…