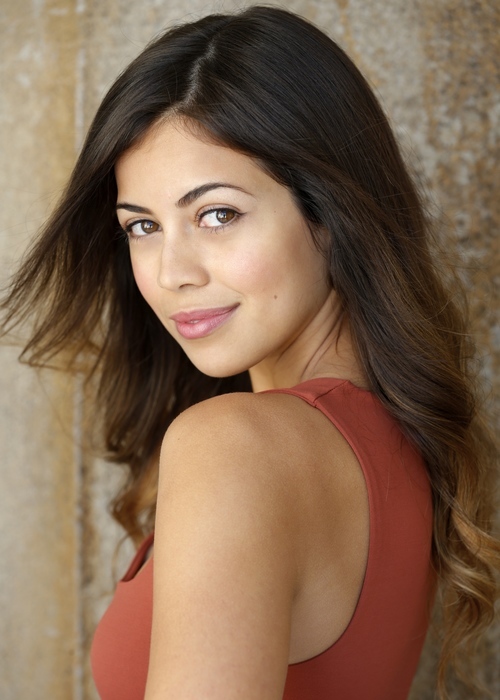 The television drama scored high with critics during its first season for its groundbreaking writing and accurate portrayal of issues some families in America face on a daily basis. During season two, “America Crime” will continue on its journey to represent real struggles of a diverse society. Angelique’s character will be the focus of those struggles.

“American Crime” will mark Angelique’s first professional job, as well. She calls landing the role a complete shock. “I honestly couldn’t believe it,” she says. “It happened really fast, just from the audition to when I found out that I got it. My life kind of changed very suddenly and unexpectedly.” She exclaims, “I was totally just excited! It’s a dream come true to have an opportunity like this. Just to do what I love and for it to be on such a huge scale like this, and to work with amazing actors who are veterans in the business who I knew I was going to learn a lot from.” She says she knew she was going to grow and that she was looking forward to it.

A recent college graduate of University of Florida, Angelique received her Bachelors of Fine Acts, studying acting. She also got a real estate minor, saying, “That was just kind of for fun.”

Born in Chicago, Angelique then moved to Virginia and then to Florida where she spent most of her life before landing her role on “American Crime”. “I moved to L.A. in January, like a month after I graduated,” she says. Coming up on the year anniversary since she moved, Angelique recalls, “I think it was like six months that I lived in L.A. and then I got ‘American Crime’ and moved to Austin to film.”

“Her name is Evy Dominguez and she’s a very strong and independent girl, for her age especially,” Angelique explains about her character on “American Crime”. “She had to grow up pretty quickly because of her circumstances at home with her family.”

Angelique explains that Evy lives in a low income area. “She lives in public housing and she’s in a very bad financial situation so she kind of had to grow up fast because of that.” Despite the odds against her, Angelique calls Evy “very caring, very loving, and very loyal to the people she cares about.”

“Throughout the show, [Evy] pretty much stands up for what she believes in for the most part,” Angelique tells Teenplicity.

Though Angelique is very different from her character, she explains that she relates to Evy in how much she’s had to grow up in such a short amount of time and how strong she is. “I wasn’t in a very low income household like Evy is but I didn’t have a lot of money growing up,” says Angelique.

“I’ve always been independent, just because I’ve had to; I never wanted to put stress on my family. Luckily, I had full ride to college and I didn’t have to worry about paying for college. But I worked my way through college. I worked since I was young and had my own money since I was young. I never really relied on my parents financially because I never wanted to give them that stress. I relate to Evy in that way because she does whatever she can for her family,” explains Angelique, also citing that both she and her character are extremely family oriented. “We’re loyal to each other,” she says of her family. “We’re Hispanic so, you know, family in that culture is so important so we’re all very close in that way.”

“For the most part [Evy] stays very positive about her situation, even though it pretty much sucks. She doesn’t mull in her circumstances and she’s very strong in that sense. I was like that too: I never made excuses. I always kept everything in check and in line and what I wanted to do.”

As an actor, Angelique recalls thinking, “I knew that I had to make it happen regardless of my circumstances, regardless of what was going on in my personal life.” She says her character is very much like that as well.

Of what sparks Evy facing racial tensions at school, Angelique could say, “There’s an event that happens to [Evy] and it kind of sparks this racial movement at the school and it’s kind of just like Hispanics trying to stand up for themselves against what they believe is racial unfairness at the school.”

Quite like art imitating life, considering the protests occurring at University of Missouri and around the country, Angelique says, “I think that’s why last season was accepted from critics and I think this season will as well. I think’s it’s really going to touch home for a lot of people who tune in. A lot of people who watch it, if they’ve experienced it, will be like, ‘Wow, yes! This is what it’s like!’ or if they haven’t experienced it, they’re going to be like, ‘Wow, I can’t believe this is happening.’”

“They’re going to be really enlightened to see what it is really like,” continues Angelique, crediting it to John and the writers, who she says is a very diverse group of writers of all races, male and female. “There’s so many different point of views in that writers rom and everybody is taking from their life. These writers are writing things that they’ve actually been through and they’re not alone in that either.”

“I think that people are really going to be amazed at how this show will hit home in a lot of different ways: racially, sexually, and economically. All across the board, I think a lot of people are going to be able to relate to this show.”

Angelique says that being a part of a show that reaches out and relates to so many people is “really incredible.” She says, “The people on this show are game changers. They’re bringing things to TV that have never been done before and it’s honestly very real. That’s just what John wants in this show: just authenticity of what it is like to live in America, what it looks like, how diverse it is, and the issues we face as Americans and living with the prejudices that are still very much preset in society right now.”

Considering how the storylines have lined up with current events, Angelique responds saying, “It’s very timely. All the issues we touched throughout the season are very timely with what is actually happening in the news and things that you see on TV.”

A lot has happened since Angelique graduated with her BFA and moved out to Los Angeles (and then Austin) so looking back over the past year, she calls it very interesting. “I never really understood why we moved so much but looking back at it, it makes perfect sense. Like, I’m used to having that lifestyle of having to move a lot and not feel like I’m glued to one area and nowadays in the acting world, it’s very much traveling,” she shares.

“Being on location, most of the stuff doesn’t shoot in L.A. anymore. So kind of looking back at my life, and the thing I’ve done and gone through, it’s all pretty much prepared me for this moment right now and being aware of that. I’ve learned that everything happens for a reason and even though this opportunity scared the crap out of me before I moved here,” Angelique divulges with a laugh. “I was very nervous. I had never been on a professional set before, I’ve never done TV, I’ve never done any of these things. I just graduated and here I am.”

However, she didn’t have anything to be afraid of as she tells Teenplicity, “That was very intimidating at first and then getting around the cast and the crew and how supportive everyone is, just being a part of the show has taught me so much that I am prepared to do this and I am ready to do this. It showed me that this is for me; this is what I’m meant to do. It just feels really good knowing that and knowing that everything before this that I went through personally, educationally, spiritually, that it all led me to this point right now. That prepared me for this moment.”

“It’s been really great,” Angelique concludes. Joking, she says, “I’ve had a lot of time to think about things!” She states that her time on “American Crime” so far has been really amazing.

With the idea of growing a fan base and a following, Angelique hopes they remember, “I’m a normal girl like everyone else and I want people to know that if I can do this, anyone can follow their dream.” She says, “I want to be kind of the role model in that way where if you believe in yourself, you can surprise yourself at how far you will get and where you’ll end up. I never, no matter what I went through financially or anything like that – I never let that define who I am or who I was. I overcame that and never gave up.”

“I think that’s so important, especially for younger people to hear because nowadays, I feel like they’re missing that a little bit. I feel like a lot of people don’t believe in themselves or aren’t confident that they can achieve amazing things. But it’s so real. It’s so possible; you just have to have that mindset. I want to be a positive influence in people’s lives in that way. I want to motivate kids to follow their dreams.”

Angelique touches on the base of what kids hope to be versus what they feel they need to be to succeed.

“It’s not all about money. I went to college and everybody’s goal was just to make money. They would get in these majors like finance and all these things that they weren’t passionate about so they didn’t do well in their major and they’re still in college like, ‘I don’t know what to do.’” Angelique exclaims, “Well, you do know what you want to do – you’re just scared to do it! They’re scared to actually take that risk and follow what they truly want out of life.”

Angelique explains, “I just want to be able to have this platform where people can be like, ‘Oh, well, she came from Kissimmee, Florida, like the middle of nowhere Florida, she made it happen! She did this, there’s no reason I can’t follow my dreams.’”

Thinking about the journey she is taking right now, and how her life will change, she has these final words to say:

“For me, this whole experience – I don’t really realize how much my life is going to change but I know that whatever happens, I just want to always remember where I came from. I want to be very aware that this opportunity is great but it doesn’t last forever. So whatever time I have or no matter where my career goes, I just want to stay constant in that fact that I’m here to give back. To charity, but mainly give back to kids and motivate them in a way to be able to do what they want to do. I think that’s so important and it’s not said enough.”

With the call to make music tugging at her heart strings, rising singer/songwriter JNNA knew she was meant to do music at the young…