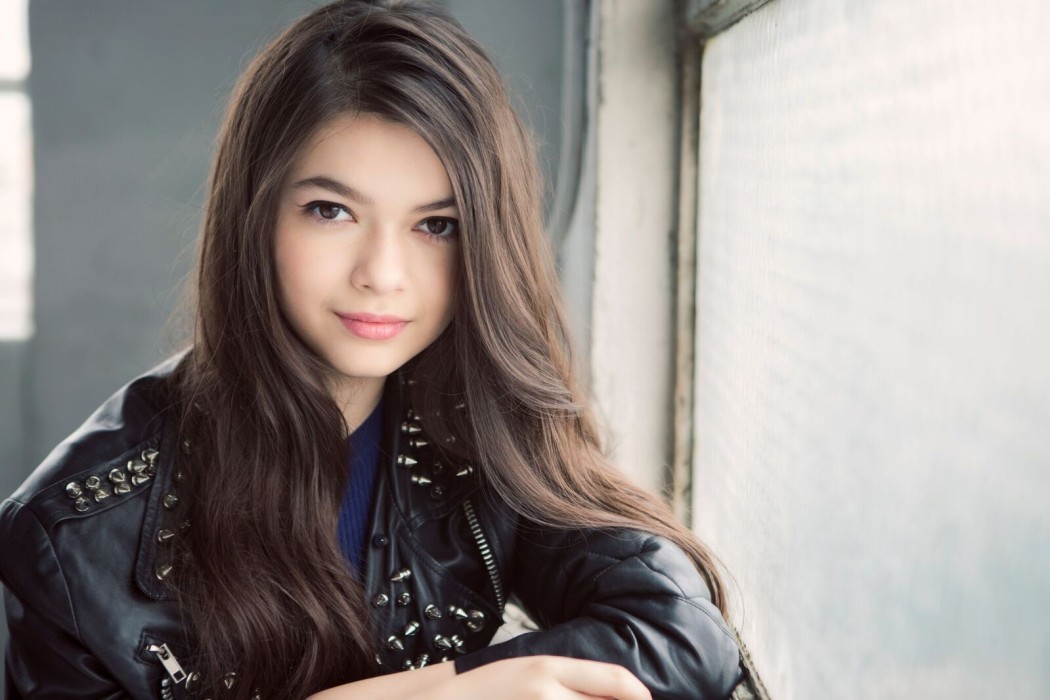 Texas native Nikki Hahn is no stranger to the Walt Disney Company. After arriving in Hollywood at the age of three, Nikki’s first print job was for a Disney campaign. After multiple modeling jobs with Disney as well as outside of the company, she landed her first commercial (yes, for Disney) portraying Cinderella.

“I’ve been working with Disney pretty much my whole life,” says Nikki as she explains that her first sitcom appearance was actually on the hit original Disney Channel series “Jessie”. However, Adventures in Babysitting will not be the first time she joins a Disney Channel Original Movie.

“It’s been such a blessing to be part of the Disney family,” she says of her time with the company thus far. “We’re all so supportive of each other, we all talk to each other; it really is a big family.”

Her Disney family only grew when she joined the cast for Adventures in Babysitting.

Nikki remembers being at karate class with her sensei the day she got the call. “There’s a big window and I see my mom take the call. She has this huge smile on her face,” she remembers. The young actress recounts trying to ask what happened and her mother mouthing the words to come outside. “I tell my sensei that I have to get some water so when I get out, I ask [my mother] what happened. And she says, ‘You booked Adventures in Babysitting!’ I was freaking out the whole time I was in the rest of my karate class. I had this smile on my face and nobody knew why. When I got back in the car, I screamed so loud,” recalls Nikki.

However, the cast didn’t even find out that it was the 100th DCOM until a week into filming. Nikki shares how they were told on one of their days off while hanging with the executive producer.

“She told us, ‘You know, this is actually the 100th Disney Channel Original Movie.’ We’re all like, ‘What?!’ Like I didn’t even know Disney had that many!” The excitement and awe is obvious in her voice as she retells the story.

Nikki plays Emily Cooper in Adventures in Babysitting, a character that’s definitely a lot edgier than the rest. She describes her character as very independent. “[Emily] doesn’t feel like she needs a babysitter. She’s emo, she has green hair and a henna tattoo.” Playing such a different character was a lot of fun for Nikki. “I loved [Emily’s] wardrobe. I loved the hair, the makeup,” she pauses for a moment as she gushes, “the makeup was just really beautiful! I loved to bring her to life, I loved just becoming her, making her a part of this movie.

Emily Cooper is one of Nikki’s top two favorite roles, the other being her character Jenny Reynolds in “American Horror Story”, both of which she credits to helping her become a more versatile actor.

“I love taking roles that challenge me,” dishes Nikki. “‘American Horror Story was just really cool. I got to play a villain. And I love gore, I’ve never been scared [of gore]. I’m the type of kid who loves Halloween. I love special effects. I love that kind of stuff.”

For those who aren’t big thriller fans, Adventures in Babysitting is a fun family movie that will provide lots of laughs, some of which weren’t planned at all. Nikki says she has a lot of favorite memories on set which will most likely make it into the bloopers of Adventures in Babysitting. She cannot wait for everyone to see all the funny things that happened on set.

Nikki takes a moment to share a hilarious story of an incident that happened off-set.

She calls her favorite off-set moment as the time when Sabrina [Carpenter], Kevin [Quinn], Max [Llyod-Jones], and herself broke an elevator at the hotel. Through her giggles, she manages to reveal that it was from pressing buttons at the same time. “The elevator just started freaking out and we’re all like, ‘What’s happening?!’ And the elevator just plummeted! We were all so scared at first. When we finally got out, we were laughing – we were literally rolling on the floor laughing!”

Unlike her character Emily, Nikki has never been babysat. She states that she went wherever her parents went. But if she were suddenly to be a babysitter, Nikki believes herself to be more like Sabrina’s character Jenny.

“In real life, I’m definitely like Lola [Sofia Carson]. I’m real outgoing, I’m very energetic. But I think if I were babysitting, I think I’d be like Jenny because I wouldn’t want to lose the kids!” she exclaims with a laugh. “I’d definitely be like Jenny, more responsible.”

When Adventures in Babysitting premieres tomorrow evening on Disney Channel, there will definitely be premiere parties as well as cast reunions. “Mallory [James Mahoney] who plays my little sister Katy Cooper, she’s going to be coming into town so we’re just gonna have a lot of fun.” When Teenplicity spoke with Nikki, she dished about plans to go to Disneyland and how she just could not wait for it!

To sum up her time filming the DCOM, there are two words that stick out most – family and fun.

Nikki goes on to say that her biggest takeaway from being on set was the family the cast created. “I came back to the United States with a family,” she says, love and fondness apparent as she speaks. “We still hang out, we’re just really close. Sofia and Sabrina, they’re my big sisters. They really are like my siblings. I think that’s the biggest thing I took away. I never worked with a cast with that many kids and that all got along. It’s like a once in a lifetime thing.” Nikki says the cast bonding together as a family and being able to hang out every day was a really special aspect of filming.

With only one day left until the premiere of Adventures in Babysitting, Teenplicity asked Nikki which of the previous 99 DCOMs she would star in, if she had the chance.

“I love a lot of DCOMs,” she admits first before choosing just one. “Probably High School Musical.” Her go-to character to play would be Sharpay! “I love High School Musical, that’s like my all-time favorite.” Most of her fans would probably agree too.

“Social media has been a really big part of my life to interact with them,” she says about her fans. “I’m really grateful for them, they all support me. I actually started a Tumblr so I could repost some of their fan art because they’re just so gifted. They all have talents,” she gushes, talking about their drawing and edits, amongst other things. “They’re all so cute! They have the cutest usernames and profile pictures. I always look at their accounts! They’re very supportive and loving.”

*Above photo credit to Lesley Bryce

“Who Would You Trust?” with Victoria Justice, Katherine McNamara, & Lucien Laviscount

Speaking with the cast of the new film “Trust”, TEENPLICITY decided to ask them a few fun questions about who within the cast they’d…