The fourth installment in a series of American Girl’s exclusive specials on Amazon focuses on various aspects of “Science, Technology, Engineering, Arts, and Mathematics”. It is intertwined with the amazing inspiration that comes from the natural world around us. An American Girl Story: Summer Camp Friends For Life follows best friends Z [Zoe Manarel] and Paz [Alison Fernandez] as they embark on an exciting adventure at a S.T.E.A.M. camp. However, they find their aspirations for the summer are halted by the realization that their devices are restricted while there. The girls are able to enjoy their summer despite this, find inspiration, and new friends along the way.

Alison plays the character Paz, a young girl that dreams to be an engineer, who she claims is a lot like herself.

“[Paz is] sassy, smart, and loves building things,” the actress says of Paz. “She’s into engineering and she’s great at math and calculations.” However, her character is not a nature lover like Z. Alison goes on to say that she also loves science experiments, solving puzzles, and math much like her character. “Plus, nature and bugs weird me out a little too,” she can’t help but add to the list of similarities. 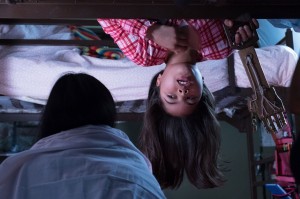 In the supposed ‘tech heaven’ of the S.T.E.A.M. camp that Paz and Z are attending, the young actress shares about her character’s enthusiasm for the summer. “Paz is mostly excited to spend time building and improving her science projects with help from her best friend Z.” With the restrictions on technology that are one of the rules of the camp, Alison says, “Paz feels it is going to restrict her science work and it won’t be fun or help her get closer to her dream job.”

Forcing herself to explore the great outdoors does inspire Paz with her branch of interest, though she doesn’t realize it at first. “In the end, nature helps a lot,” Alison explains. “It taught her that even without tech, she can still do a lot of things.” In fact, Paz learned more than this from her time at camp.

“Paz liked to work alone, but when her science skills aren’t enough to solve some problems at camp, Paz learns the value of teamwork and having friends.”

Alison also gained new insights from her time portraying Paz. “I learned that every person has their own specialties and talents, and if we all could work together, we can do some really great things. So we should never be afraid to ask for help.”

Stepping into the shoes of an aspiring engineer had been easy for the actress due to her already present love of math and building things.

“I believe girls can do anything they want to do and be anything they want, too,” she says in response to the fact girls don’t often find themselves represented or encouraged to pursue various areas of S.T.E.A.M. “So it was great to be able to play an engineer and a lot of fun to play someone that was a lot like me.”

Although she hasn’t spent a summer at a camp like her character, the talented actress looks forward to it someday. Her dream summer camp would be one full of lots of activities, different subjects, and passions for each and every one.

Alison hopes that specials like An American Girl Story: Summer Camp Friends For Life “teaches teamwork, self-confidence, bravery, kindness, and to be passionate about whatever you love doing.” Teamwork is the aspect of the film that she loves the most. “Nowadays, there’s a lot of competition and fighting, and if people learn to work together, great things can happen.”

“She would be a [Taekwondo], karate, judo, martial arts girl.” More features her doll would have include that she’d be into swimming, running, tennis, and soccer. She would also be an actress and still go to school! “Yes, and she would definitely have a lot of accessories!”

Usually, when someone mentions Canadian talent, their first thought is the likes of Drake. However, despite actor Mena Massoud not considering himself to be…