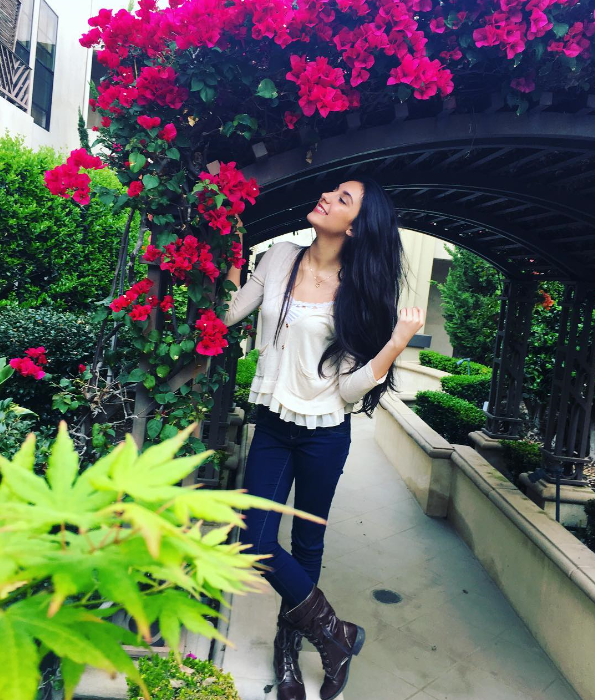 Check out what Coco Grayson has to say below!

In the reality of life, not every person is going to be extremely outgoing or forward with who they are. Although television thrives on these types of characters to help drive a story forward, Gortimer Gibbon’s Life on Normal Street proves that you don’t always need that.

Abigail, portrayed by Coco Grayson, is a reserved girl, preferring to be left to herself and stay in the shadows. When first introduced to the audience, viewers only know her by name and by what she draws, much like Gortimer [Sloane Morgan Siegel] when he sees she has signed his cast. Not able to recall witnessing her in the act, and his friends having no recollection of who she is, Gortimer goes on a hunt to find out more about this mysterious girl.

After finding Abigail, and making an attempt to have the whole school see the genius behind all the amazing artwork across the grounds, Gortimer is faced with the reality that he hasn’t had a friend like Abigail before and he didn’t know how to react. She proclaims that yes, she likes to sit at the back of class and yes, she is quiet, but that is because it is what she is comfortable with – she is not broken. Gortimer understands where Abigail is coming from, and does not push her further but allows her to take steps to branch out with Mel [Ashley Boettcher] and Ranger [Drew Justice] on her own.

Coco Grayson found it easy to become the quiet artist.

“Playing a character like Abigail was extremely natural for me, being that she and I have so many similarities already,” Coco says. She says because of her own reserved nature, playing Abigail was basically like playing herself.

The similarities don’t stop there though. “Like Abigail, I express myself through drawing, painting, and even sculpting. We both use art as a means of release. Abigail and I both have a humble, reserved nature which is often mischaracterized as shyness. Because I’m an actress and am put into many social situations, I am a little more outgoing than Abigail, but still, I definitely relate to her personality and laid-back nature.”

As the first season progresses into the second season, audiences get a front row seat at the growth of Abigail, who even branches out to form a friendship with Mel, even though it did hit some rocky points very early in.

“Though Abigail’s growth is a slow process, the transformation she undergoes and her ability to slowly face her fears is very inspirational not only to other kids, but myself as well.” With there still being quite a few episodes left of season two, her growth is not stilted. “Abigail continues to blossom and find herself as the season evolves. As her friendships grow, so does she.”

A friendship in particular that has caught a lot of interest is the one between Abigail and Gortimer, which has been teetering on will they, won’t they for quite some time. In the first half of season two, it’s obvious that Gortimer has feelings for Abigail but she isn’t ready to date. However, in the last episode audiences saw, Gortimer revealed that he wrote a letter to Abigail while she was at camp saying he has a girlfriend.

Will fans ever see their relationship evolve or is it stuck as a friendship forever? Coco is keeping her lips sealed about the duo for the most part, only teasing, “They definitely revisit the topic. You’ll have to tune in to see!”

There is one character that audiences haven’t seen interact much with Abigail and if it were up to Coco, she definitely would have added it.

“The character Stanley brought a lot of humor to the show and I would have enjoyed having more comedic scenes with him,” she reveals. “I think Abigail’s [subtler] humor and Stanley’s spontaneous humor would have made an interesting combination.”

What viewers will be seeing is growing up and evolving from childhood, says Coco. The young actress dishes, “The fans will see so many different sides of the characters this season, especially in Abigail. Relationships grow, friendship remains, and bonds become stronger. It’s going to be a really great season with a lot of plot twists, touching hearts in the process.”

One plot twist in particular is that of Gortimer facing the fact that he and his family will be moving away from Normal Street. While he has helped the lives of so many people in the town, one which he has affected the most is Abigail.

“Abigail will miss Gortimer, but she still has his best interests at heart,” Coco says of what her character’s life will be like after Gortimer moves. “The spirit of Gortimer will always exist on in the lives he touched while on Normal Street.”

While nothing is set in stone, to the best of everyone’s knowledge, as to what is in the future for the favorite kids of Normal Street, Coco has a pretty good idea of what she thinks Abigail’s future would be like.

“I think Abigail has the absolute capability to become a famous artist or at least a very well-known person in general, but due to her humility and quiet personality, I see her instead growing up to do something inspiring yet a little more obscure,” says Coco. “Abigail is the type of person who doesn’t need tons of attention to thrive.”

When speaking with the cast, there were three questions that every cast member was asked. Here are Coco’s answers to those questions.

Teenplicity: What is something you’ve learned about yourself from being on the show? Have you gained anything?

“I learned to stay true to myself. Abigail taught me that. Her certainty and ability to identify exactly what she wants inspired me to become [a more] decisive person. Through the craziness of filming and playing another person, sometimes you can lose your own sense of identity. It’s important to stay grounded and never lose your true values.”

“I would have a lot of character building experiences, molded by endearing friendships and a strong sense of community!”

Teenplicity: The show received a lot of audience and critical praise for its accurate portrayal of childhood and growing up. Having grown up a bit while on the show, what will you miss most about ‘Normal Street’?

“I’ll always miss getting to be Abigail every day. While filming, I developed a deep bond with my character, and she kind of became a part of me. I will never forget the feeling of playing her and getting to bring her to life through the camera. It was a truly incredible experience, and I am so grateful.”

To keep up with all things that Coco Grayson is doing, be sure to follow her Instagram!

Keith L. Williams is Out of This World in ‘The Astronauts’

Before Keith L. Williams found himself stuck in space, he starred in the coming-of-age comedy Good Boys. Moving from a film about middle schoolers…