Check out what Chandler Kinney has to say below!

There are probably not enough words in the English language to describe the brilliance of Catherine. Portrayed by Chandler Kinney, the first glimpse of Catherine’s character is when she announces her science fair project – a device that collects car exhausts and disposes of it properly, effectively helping to cut down on the repercussions cars have on global warming.

“I remember reading the role of Catherine and I was immediately intrigued by it,” Chandler says the first impression she had of her character. “She’s clearly a ‘brainiac’ and has all the qualities of one: intelligent, ambitious, driven, and determined. She also can be a bit snappy and competitive at times which adds another layer to her.”

What also really helped Chandler gravitate towards Catherine is that she has a lot of heart.

“Of course she’s confident and is a perfectionist, and in her first episode, you can tell that she is a bit of a loner. I wanted to see the growth of her new friendship with Gortimer, Mel, and Ranger and the effect it has on Catherine.” In fact, another reason she enjoyed being Catherine so much was that they’re very similar. “It’s always fun to play someone similar to you!” she exclaims. “I really wanted to be the one to portray her and I’m so grateful that I had that opportunity, and to watch her mature as a person.”

One of the greatest things about Gortimer Gibbon’s Life on Normal Street is how inclusive they are of all their female characters in the various fields of Science, Technology, Engineering, Arts, and Math (S.T.E.A.M.), something that was not always very welcoming towards women in the past. The show gives a breath of fresh air to the young female characters who, while this may be shocking to some show-runners, are not obsessed with boys 24/7. Each female character has found themselves to be an integral part of plots, using their knowledge and skills to help overcome problems that the group is facing.

Chandler takes pride in her character Catherine, which is wonderfully obvious as she says, “I’m so honored that I was able to play such a bright young girl. I can’t stress enough how important I think it is that young girls have strong, smart women in the media to look up to. To be a part (even a small part) of the progress toward a decreasing gender gap in S.T.E.M. fields, and gender parity in general, is an incredible feeling.” The bright actress goes on to say, “I hope by my portrayal of Catherine, I have inspired many young girls, especially those of color, to not let obstacles such as society’s gender roles or stereotypes determine their success and achievement in life.”

Another way the show breaks away from a stereotypical portrayal of teenage girls is how it handles the friendship between Mel [Ashley Boettcher] and Catherine. After first being introduced as competitors for top prize for their class science fair, or enemies if you had asked Mel, the girls find common ground and bond, rather than have them remain jealous enemies like so many other shows have done.

“I think Catherine and Mel’s friendship has an interesting dynamic that makes them so brilliant together,” says Chandler. “While both girls are quite ingenious, Catherine is more technical whereas Mel is more artistic. When working on a project or solving one of the many mysteries of Normal Street, they both have great ideas and can work with each other so well. And I love how they are not your stereotypical teenage girls. There is no jealousy between the two, only a friendship of mutual admiration and respect.”

With such brilliant minds, it’s almost a given that the two would end up working together. After creating an edible spoon and fixing problems with a photoshopping program, Chandler thinks about the possibilities that could have happened in another season.

“If there were another season, I bet Catherine and Mel could have invented something truly spectacular. Maybe they would perfect the flying car and make it widely available and affordable! With their collective brain power, they could do most anything!” While there sadly won’t be another season, there is no doubt that fans wouldn’t have trouble accepting that as a head-canon of what could happen post-Gortimer.

Even independently, Catherine’s mind is out of this world. Her intelligence at already such a young age proves that if you think it could happen, she would probably create it in the near future. The future of her character after Normal Street, according to Chandler, is well thought out.

Despite saying in her first episode appearance that she didn’t think she’d want to go to college, Chandler is convinced that Catherine will choose to go to college. And what would her major be exactly? Environmental Engineering, Politics, and Film, all great subjects that has been touched upon with Catherine throughout the series, and also things she has excelled at. “After her successful career in politics and engineering, she will end up directing many films,” Chandler imagines.

When asked what she would do if she was Catherine for a day, Chandler answers, “Since Catherine basically solved the problem of global warming in the first season, I would want to take on other global issues such as world hunger. Or perhaps I could find a way to provide clean water for everyone around the world. I bet Catherine would have some interesting ideas on those topics!”

While viewers might not get to see Catherine’s exact answers on those topics, they will get to dive deeper into who she is as a person. “I’m so excited for the next [part of the second] season because viewers will get to learn a lot more about Catherine,” she enthused. “They will see her home and family, which will reveal even more about Catherine’s personality and life. Along with that, viewers can look forward to seeing more of her karate skills, her spirit, and her growth with the rest of the kids.”

Although Chandler won’t say too much, she does spill that her character is accidentally affected by a certain potion. She says, “[The potion] causes for a very interesting and funny episode! I don’t want to give anything away so I won’t say anything else!” If fans look closely at the trailer for the remaining episodes, it almost alludes to a love potion accident between Catherine and Stanley. As for how accurate that is, Chandler stays mum, but it doesn’t deter her hype for the episode. “I can’t wait for everyone to see it!”

A big moment that is weighing heavily on all fans minds with the upcoming final episodes is Gortimer’s [Sloane Morgan Siegel] move away from Normal Street, which Chandler says will affect her character quite a bit.

“[Gortimer] has been such a positive influence in her life and they have become great friends. And Gortimer’s move will affect Normal Street even more. In fact, the whole street could be in serious danger. You’ll have to watch to see what happens!”

When speaking with the cast, there were three questions that every cast member was asked. Here are Chandler’s answers to those questions.

Teenplicity: What is something you’ve learned about yourself from your time on the show? Have you gained anything?

“From working on the Gortimer Gibbon’s Life on Normal Street, I have been reminded of the importance of cherishing each and every moment of my childhood and to stop and really enjoy the little things in life. I’ve also gained some really amazing friends. That is something valuable that I’ll always have because of this show.”

“If I lived on Normal Street, every day would be an amazing experience.”

Teenplicity: For a show that has been praised across the board for how it captures childhood and growing up, what will you miss most about ‘Normal Street’?

“Normal Street is a place full of the beauty and many wonders of childhood. We give a raw and accurate representation of all the ups and downs of being a kid (with a touch of magic of course). I think that is one of my favorite things about our show. I will truly miss all of the excitement, mysteries, and marvelous adventures Normal Street has to offer.”

To keep up with everything Chandler Kinney will be doing next, make sure to follow her on Twitter! 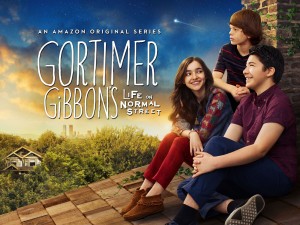 Miya Cech Makes the Most of ‘The Astronauts’

As Nickelodeon’s newest series The Astronauts rocketed onto television screens last night, it established itself as premier entertainment. A collaboration with Imagine Kids+Family, the…