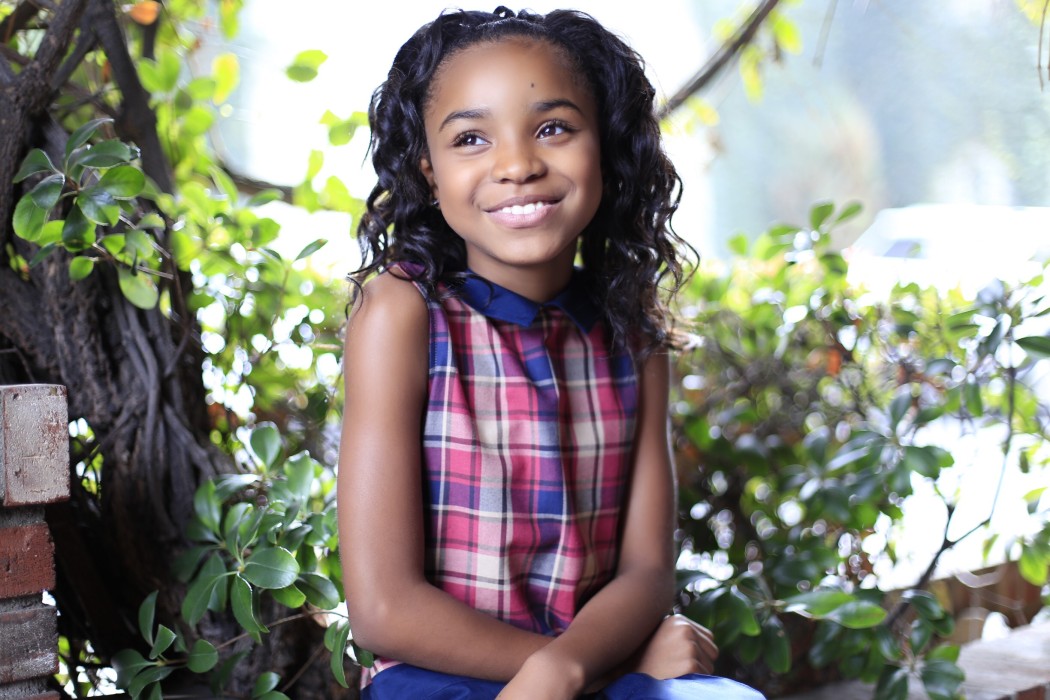 Bubbly, energetic, and talented ten-year-old Saniyya Sidney has had the opportunity to work on both films adding to her already impressive resume which also includes the recent season of American Horror Story and the ROOTS remake.

“I get to learn new things that I never knew about history and how it was really like back then,” Saniyya says when I get on the phone with her one Sunday to talk about her roles. The young actress shares about getting to work on so many historical projects. One takeaway that she shares is the basis of remembering to “go out there and chase your dreams.” But for Fences, Hidden Figures, and Roots, Saniyya also walked away with educational experiences. “On Fences, I learned about August Wilson, who wrote the play originally, and I learned how he tried to make it, how he wrote it, where he did it, and how he got it. It was also really cool to see his words.”

“And then, Hidden Figures, I learned about DC, [about] these first African American women to work at NASA, and I did my research before I went to shoot and I figured out that my character and my sister, our dad had died and our mother is the only thing that we have,” Saniyya explains. “So basically, we just have each other, so we’re there for each other. My sister and I are just there for our mom and support her with everything she does in her power for us.”

Saniyya also reflects on her time working on Roots. “You know, you always have to do your research before you go and work on something,” she begins. “I figured out that it was a historic piece that was recently shot in 1972 and I was really honored to play young Kizzy because she has a good personality, she’s strong, even though she doesn’t have a lot of things, she still has her parents and she’s that tomboy that wants to be an Eagle Warrior with her father.” Saniyya finds a connection between Kizzy and her role as Constance in Hidden Figures in how both girls remain strong for and support their parents.

Getting to work in historic pieces, especially Hidden Figures which covers a story that has, for the most part, gone ignored in history classes when focusing on the Civil Rights Movement of the 60s and the 1969 moon landing, Saniyya acknowledges being a part of this film offered her so much to learn from. Both on the bigger picture of getting to learn about history, overall, and on the more focused scale of being a part of documenting the role that African American women played in fighting against segregation, racism, and sexism while fighting for their rights and proving their intellect and abilities, Saniyya says, “I think it’s special because I think that not a lot of kids know what it was like so, getting to know, even though I’m ten, getting to know that sort of stuff is crazy. But at the same time, [it’s] interesting and you really want to look into it more and it’s a really special time, at the same time [it’s] tragic and I really want to learn more about it.” 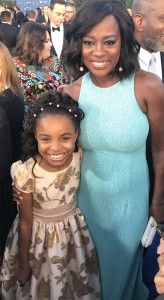 Fences, considered to be one of, if not, August Wilson’s most know “Pittsburgh Play,” explores the African-American experience through the themes of race relations, class, masculinity, opportunity (or lack of), etc. through the experience of a lower middle-class African American family, more specifically, Troy Maxson (Washington) a 53-year-old black man who once had so much promise as a baseball player, but is now a trash collector. Saniyya plays the role of Raynell Maxson, the illegitimate child of Troy. Representing the idea of hope and innocence, Raynell is the youngest of Troy’s children and the one who has suffered the least at the cost of Troy’s circumstances.

“We had a two-week rehearsal before filming where we all sat in a circle together and tried to figure out what we would say at this point, what we would do at this part, or what would we fill, what would we act, how would we react and what would we say,” Saniyya began when I asked her how the cast and crew helped her with understanding some of the heaviness in the piece. “We just worked off each other and if we made mistakes we would go back and think and then do it over again and when we get it we would be so proud of each other. Of course, I had to ask them a few questions because some stuff I didn’t get until I really got into the moment and that’s why I rehearsed all the time because that two-week rehearsal taught me a lot and to get to know my character.”

Working on Hidden Figures, Saniyya gushes what blew her away about the story, “I was most excited about how I got to be in the environment where my mom and her two best friends were working at NASA helping the astronauts go into space.” Showing, not only the importance of representation but of making the effort to acknowledge the power and achievements of marginalized groups, Saniyya exclaims, “I thought that was so cool! So every scene we did, I just thought to myself like, ‘Dang, wow your mom’s smart!’ And to be in those type of scenes where you get to watch your mom do a mathematical situation or do a countdown and get to go back to the times where it actually happened…being at those scenes, it was so fun.”

“It felt like you were really in there,” she giggles. 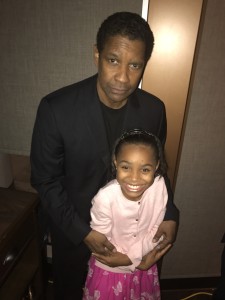 Getting to work with the powerhouse likes of Denzel Washington, Viola Davis, and Taraji P. Henson among others, Saniyya reflects on how she took away so much from working with them. “Well, they treated me like no other person. Being my age, some certain stuff they couldn’t do, but Denzel taught me a lot because as an actor and a director, he didn’t just give directions and go, ‘cut, cut, cut, let’s do that again.’ He would bring everything to the table and expect you to be 100% and that’s what I did,” she explained saying that Denzel pushed her while teaching her instead of exaggerating or just acting, she should just be herself.

“Just take your time and take in the moment,” she summed his lesson up.

“Viola taught me how, of course, to be a young woman, she’s like a second mom to me,” Saniyya said warmly. “We had so much fun with each other, especially on set, and she got me a gift and I really thank her for that. She taught me to control my emotions and how to stay in the moment and just work off each other.” She also gave a shoutout to the rest of the cast as well including Jovan Adepo, Stephen McKinley Henderson, Mykelti Williamson, and Russell Hornsby calling them a family to her.

Playing the daughter of Taraji P. Henson’s role, Katherine Johnson, in Hidden Figures, or as most of Twitter has classified her “Everyone’s Auntie,” Taraji seems to be just as loving and fun as one would hope. “She taught me how to, you know, just be fun and let all your energy out,” Saniyya exclaims before remembering a moment on set that meant a lot to her. “She said I reminded her of how she was like when she was a kid and that really was nice of her and she was fun to work with too. We all let out energy and we just brought everything to the table, [we] brought our A game.” 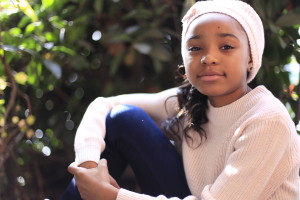 Being around women in STEM is not a new thing for Saniyya and before realizing her love for acting, Saniyya originally thought of being a nurse. “Yes, about that, before anything else I really wanted to be a nurse because almost my whole family on my mom’s side are nurses. And my grandma really inspired me,” she starts when I ask her about it. “Being that I’m in the acting business, I would love to help inspire someone to be a nurse or a doctor or firefighter or be whatever. So, I would love to get a role in Grey’s Anatomy or something where I could be a nurse and actually get to be taught how nurses do stuff on a daily basis.”

“When I was five years old, I would always watch Hannah Montana and Phineas and Ferb and Lab Rats or something and I always would see them just doing what they love and it wasn’t just acting,” Saniyya said about what made her fall in love with acting. “I thought I would one day love to be on a red carpet or I would love one day to be in an interview or on a Q&A and I can tell that they were doing what they love, how happy they were so I knew from that day when I was watching television.” Saniyya went to her parents and told them she wanted to be an actress, showing her determination when she begged her parents to let her act. While her parents weren’t sure if she was ready believing that she was too young, Saniyya began to take acting classes at Sterling Studio, insisting, and so far is proving, that she is. “I love doing what I love because it just inspires me and of course, Miley Cyrus, she was my favorite and Phineas and Ferb, it was cool that they got to do voiceovers and stuff.” 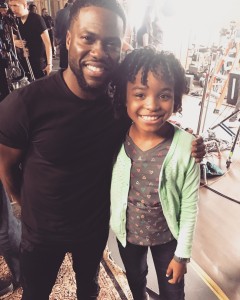 Saniyya brings it home by referencing another popular character that she looks up to. “I also want to be—I don’t want to be a villain—but I want to be another version of Harley Quinn. But, not a bad version,” she muses. “A good version that saves people’s lives.”