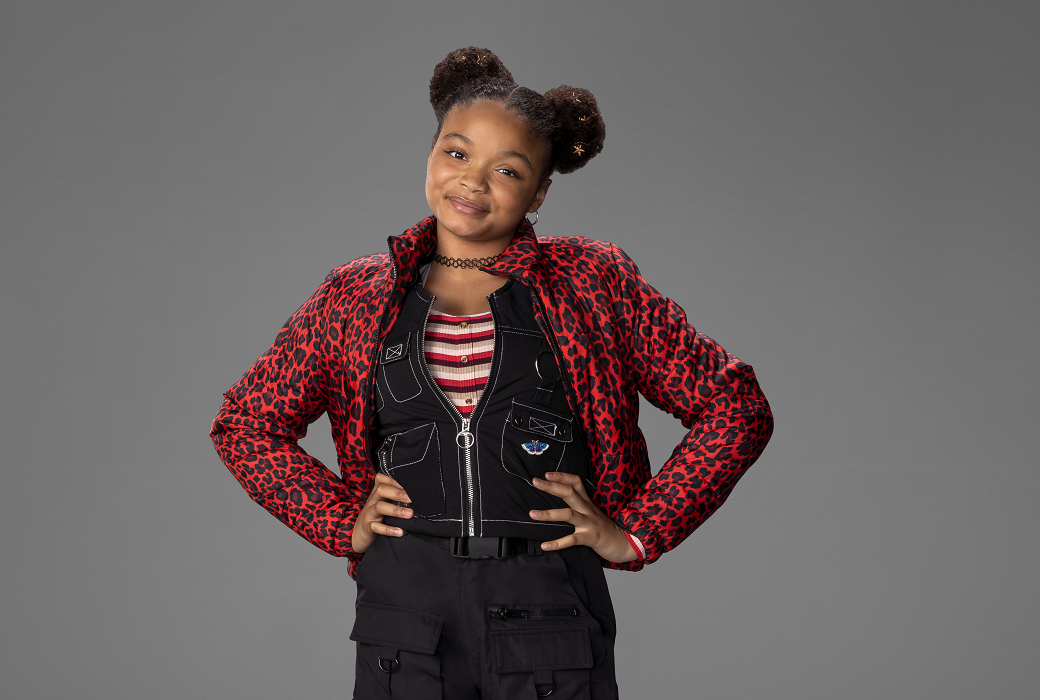 It’s hard to imagine being sent up in a rocket to space without any formal astronaut training but that’s what happens to a group of five kids in Nickelodeon’s The Astronauts. After sneaking aboard the spacecraft that many of their parents had a hand in creating, the group of kids are mistakenly launched into space and will have to learn to work together in order to survive.

The idea of being put in a situation like that is daunting, but one can easily imagine how Kayden Grace Swan, the actress behind Doria on the series, would be able to conquer the task in real life as much as she does on the show.

Kayden has been a Girl Scout since she was six years old, learning necessary skills in life and business to grow as a person. “I get to help in my community, learn new things about the world, the importance and value of women and girls, and entrepreneurship all while having fun!” the actress says of the organization.

Currently working towards her Silver Award, she discusses the impact being a Girl Scout has had on her personally. “Working towards earning my Silver Award is giving me the chance to show that I am a leader who is determined and dedicated to improving my community. I am learning to step out of my comfort zone and feeling good about it. I’m making a difference.”

Being able to bring that leadership knowledge and helping attitude would make Kayden a great member of a space crew, much like her character Doria. 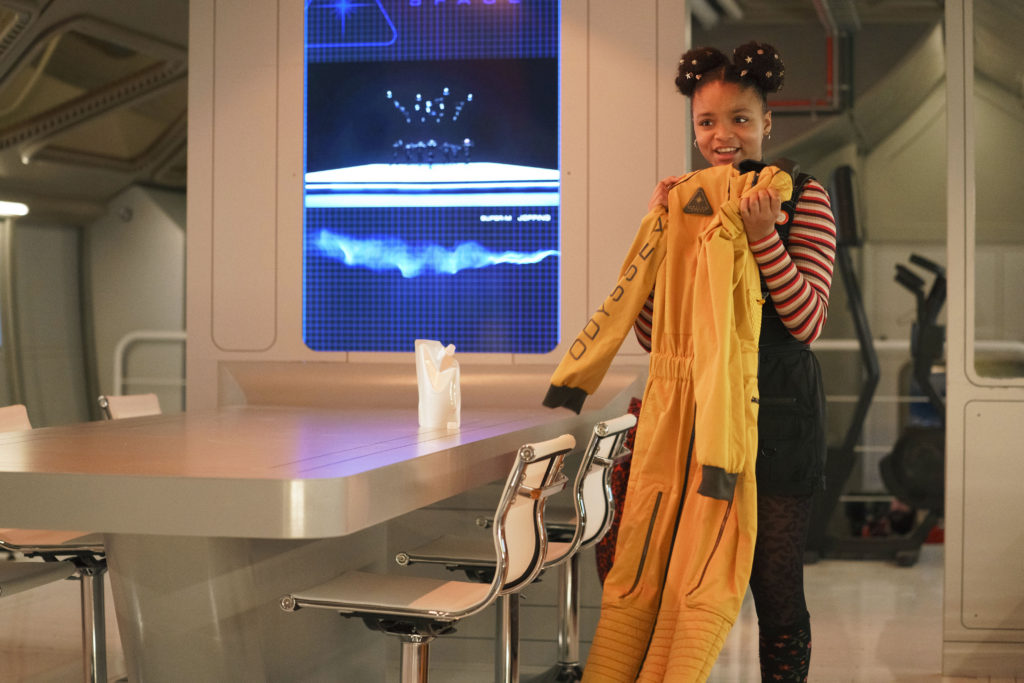 “I think the biggest things Doria and I have in common are that we are creative, love fashion, music, science, and social media,” the actress says of their similarities. “Most [of] all, we can make even a dreadful situation feel special and fun.” The differences between her and her character are few and far between. “The biggest difference is definitely that Doria loves K-pop and I love hip-hop!”

Describing her character, Kayden says, “Doria is self-confident, stubborn, and – unlike her brother Martin – extroverted. She is obsessed with fashion, pop stars and music, and has an interest in medicine.” However, when asked if this interest in medicine may lead to Doria becoming the ship’s pseudo-doctor, she only says, “Doria is passionate about everything she does and uses all her interests and skills combined with her out-of-the-box creative ideas to assist her crewmates aboard Odyssey II.”

She continues to describe Doria, saying she likes to argue and always gets her way. “If asked what she wants to be when she grows up,” Kayden begins, “she would reply that she’s going to be a Nobel-winning neurologist AND a top fashion designer AND a professional choreographer.”

The trials and tribulations that Doria experiences throughout season one is going to challenge her on many levels, though it will prepare her for whatever she faces in the future.

“Doria’s journey is unquestionably one of many ups and downs,” Kayden says. “The lack of ‘normal’ social interaction results in her falling into some sadness but her combination of intelligence, calm, dexterity, compassion, and creative thinking ultimately help her to become an unexpected hero.”

When it came to bringing out those feelings of sadness that her character faces, as well as the idea of being away from so many people she interacted with on a daily basis, the actress looked to her own life during quarantine.

“Ironically, after we returned to filming after our pandemic break, I was really able to have a better understanding of isolation and being away from friends and any sense of normalcy because of my real-life quarantine experience,” she explains.

Doria’s bubbly aura helps the group through those times when they’re feeling down and unsure. “Doria’s lighthearted, fun personality brings a lot of levity to the group dynamic,” Kayden says. It helps that she has her brother Martin looking out for her while they’re in space together, something the other kids in the group don’t have.

“Doria having her big brother with her allows her to have one person who ‘gets’ her,” the actress explains. “Their relationship goes from one where she enjoyed Martin getting in trouble for things she did, to realizing how valuable and important her brother is to her.”

She continues about their relationship, “Being put in a life or death situation makes their once typical big brother, little sister relationship change quickly. They begin to recognize, acknowledge, and even accept the reality of their situation.” From this, the two grow both individually and together. “They learn to help one another move through fear, anger, sadness, and worthlessness very rapidly. Experiencing dangerous situations has some good lessons and they use those to learn how to be resilient in this crazy situation,” says Kayden. 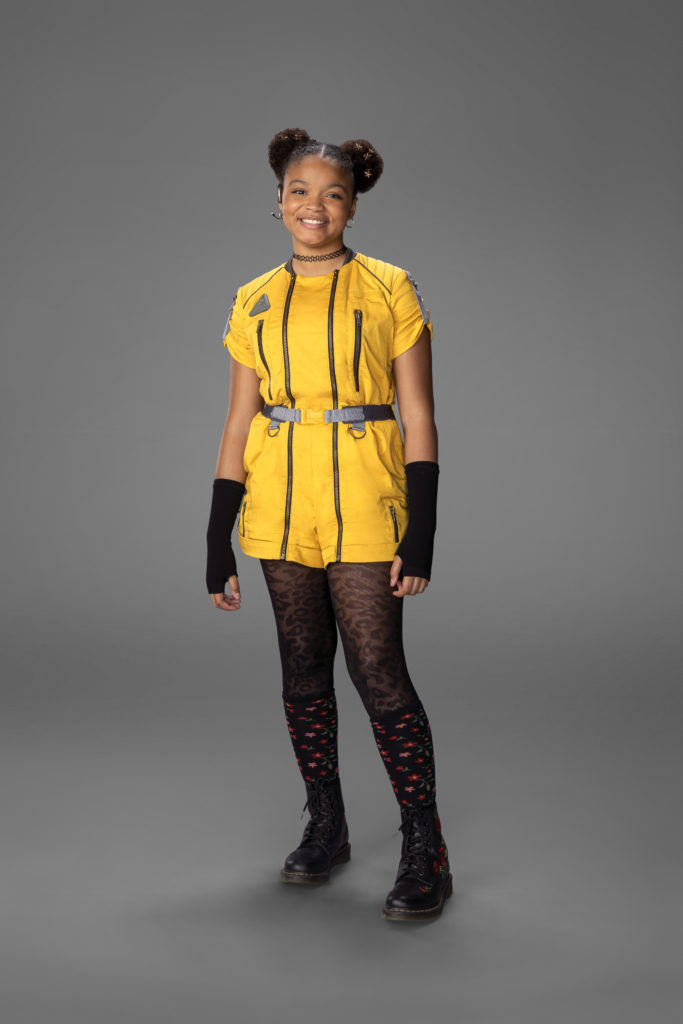 One crazy situation that Kayden has found herself in because of the series is having to portraying the zero-gravity of space while here on the ground.

“It was so much fun!” the actress exclaims about having to act like she’s in zero-G in some scenes. “I compare it to the feeling of floating in water but without having the water! I would imagine myself being so light, that I could move around with hardly any effort.”

Kayden has quite the athletic background to help her out when it comes to taking those scenes on. “My ballet and gymnastics background have been extremely helpful when portraying zero-G… on a set with gravity!!” she enthuses.

She explains of how the cast accomplished this, “The technique we were taught to mimic floating in zero-gravity is to imagine your arms and legs are supported by balloons. So, to make that look realistic, I used my flexibility and natural fluidity. Also, I had to use my core muscles to maintain standing on one foot while making the floating motion. It definitely took a lot of practice!”

When speaking with the cast of Nickelodeon’s The Astronauts, there were a few questions that every cast member was asked. Here are Kayden Grace Swan’s answers to those questions!

KAYDEN: By far the garden!! It always felt like Earth.

KAYDEN: The spine of Odyssey II was my most favorite place to film. There are so many behind-the-scenes effects that make it super cool.

KAYDEN: Matilda! I think her character is so cool and being the voice of the AI that controls the ship would be amazing.

KAYDEN: The cinematography and the special effects along with the amazing adventure we go on!

*Major season 3 spoilers below* Everything old can become new again. It’s a quote that has found itself being reinvented and taking on new…