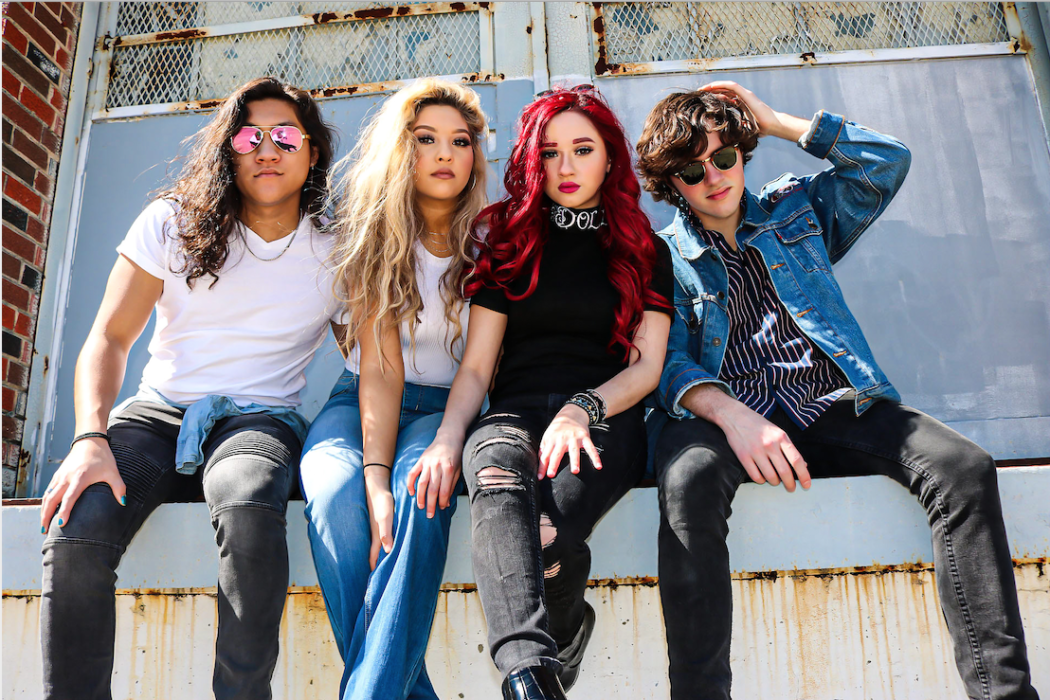 If there is anything in Texas that is hotter than the summer heat, it is the growing music scene. Whether it is country, pop, rock, or another genre, Texas cities are quickly becoming a rising area for new artists to be discovered.

Sisters Zoe and Molly Flores hail from Houston and make up half of the new band RōZY. The group has already garnered nearly 50,000 views on their first music video released just a month ago – a cover of the Nirvana classic, ‘Come as You Are’. With Zoe as the lead vocals on the cover and Molly backing, the cover offers a fresh, raw take on the beloved song. Her voice digs deep into some lyrics – namely the repetition of “No I don’t have a gun” – while gaining a softer edge while repeating “Memory…” and during the verses before growing rougher and deeper as it inches towards the pre-chorus and chorus, offering a new flexibility within the song.

Covering a well-known, iconic song is a daunting task for any band, but especially one who is going to use the cover to release it as their first single. This will set up the foundation for the band as they move on; their performance determines how strong their jumping board will be going forward.

“Oh yes, 1000% we were totally nervous,” Zoe says of the mindset ahead of covering the song. “Everyone knows who Nirvana is – however, I feel that if you don’t take risks like that, you’ll regret it.” She says of the group, “We all went in knowing that there will be people who hate our version just because it’s not the original, and that’s totally okay. Everyone’s allowed to have their own opinion. Either way, we didn’t want that to stop us. The people that were open to the new take on it though are really what aided us into knowing we made the right decision.”

Overall, there will always be differing opinions and one just has to trust their gut. “At the end of the day, we’re just a couple of kids with a dream to make it in this industry, and we are so blessed that our first single out was an awesome homage to one of my favorite bands.”

As it turns out, there was nothing to worry about even from the start.

The comment section alone, aside from the tens of thousands of views on the video, has been immensely positive. One such commenter even praised the song so much, they felt the band did better than Nirvana. “The response to the cover has been insanely awesome!” Zoe cannot help but exclaim. “We are so honored to hear the compliments from people. Our main goal was to pay an honorable homage to Nirvana but with our own twist to the song, and I am just so glad that lots of people are here for it. It makes us extremely happy.”

Rocking out to Nirvana now with the rest of their bandmates, Zoe and Molly were actually a duo first before finding the missing pieces to their musical puzzle.

We almost actually quit literally months before we got management and a record deal.

Their love for music, and desire to form their own band, actually came from a video game – Rock Band. “My sister and I would go over to our babysitter’s house during the summer, and she bought her kids the game one day. We all ended up on that thing for hours with my sister playing the drums and I’d either sing or play guitar,” Zoe reminisces. This spurred their passion onward. “After our mother saw my sister had an interest in the drums, she went to the pawn shop the next day and came home with an actual kit. Being the older sister, I didn’t wanna be left out,” Zoe says, and one can imagine the amusement in her voice as she thinks of her younger self, “so I asked my mother if I could get an instrument too. She then asked me what I wanted and I had said the guitar. Once we got our instruments together, I simply just said to her, ‘Let’s start a band. It’ll be cool!’ The rest is history.”

Before the two formed RōZY in January of 2018, they spent eight years performing together under another name, according to Zoe. “Since we had grown up quite a bit since our forming of our band at ages 10 and 11, we wanted to start a new chapter,” the singer explains. “The best way that we thought of going about it was by having a name change. Thus, RōZY was born!”

The name itself is actually a nod to the original Rosie the Riveter, according to the singer. “She was such an icon during the Second World War for women, and our band is all about empowerment and believing in oneself, so that’s why we went with the name,” she explains.

The biggest change that came about with the different name was the addition of new band members. For so long it had been just Zoe and Molly before they added Brandon Martinez and Charlie Bubenik.

“It was very different at first,” Zoe says of the group dynamic. “We went from just walking to the other sibling’s room to knock on the door and say, ‘It’s time for practice,’ to having to schedule rehearsals with Brandon and work around his life and ours to make it work,” she says of the guitarist who joined the group in 2016. “It all ended up working out really well though and we performed like a well-oiled machine with him. Once we added Charlie to the mix, it ended up being really smooth of a transition.” Discussing the bassist, she says, “He’s so fun loving and witty, and we all got along well right off the bat. So I feel that it worked out nicely.”

The dynamic between herself and her sister Molly remained strong through the wonderful changes the band experienced.

“I think our dynamic has really always been the same since we started at such a young age,” ponders Zoe. She says of her sister and the support they’ve been able to offer each other, “She’s there when I’m in a song writing block. We bounce ideas back and forth to help improve the band. If I mess up on stage with a song, she always knows how I’m going to fix it.” She credits that to having formed the band originally at such a young age. “We grew up fast with this; it definitely made us closer and more intuitive with one another,” she explains.

Girls can rock just as hard as the boys.

It makes perfect sense that, when Molly is asked to describe Zoe in one word, she says, “Showman.” Zoe returns the favor, saying of Molly, “Smiley!” Their support for one another and the reassurance of each other’s presence not only strengthens their bond as sisters and as bandmates, it also offers a warm environment to practice their craft in which each one’s strengths are able to thrive and bring out the best in themselves and the band.

Going on to describe the other band members, Zoe says of Brandon, “Intricate,” and of Charlie, “Fun.”

While things seem to be going well for the group now, it hasn’t been a smooth road leading up to this sudden and growing burst of success.

“We almost actually quit literally months before we got management and a record deal,” Zoe reveals. She has to laugh, though, as she adds, “Really glad we didn’t though!”

Pulling back the curtain to reveal what it is like to work within the group, Zoe says that usually she’ll already have the skeleton of the songs ready, ‘with lyrics and a melody or two’. “We go to Brandon’s house where we then run through it a couple times so everyone can get a feel of the song. If I’ve got a specific part I want one of them to play, we try it to see if it works or not; but normally I’ll just let them get a feel and we all try out different and new things.” The band has similar objectives when it comes to what they want the band to accomplish. “Our goal is to always keep people on their toes with us musically. We try hard to make every song we put out sound different in one way or another. Once we get a song together, we [run it] as many times as we can and see what needs to be fixed or how we can improve,” she explains.

Summing up the creative process between the four of them the best way that she can, Zoe says with a laugh, “It’s organized, but also very chaotic with everyone playing at once trying to figure out what to do.” Like the saying goes, there’s magic in the mess, which is evident to all who hear their music.

“The music that we are currently working on is very much in the umbrella of the rock genre,” Zoe teases of what the group is working on. “We like to think that since we – my sister and I – have played sooo many cover shows over the years and know at least four hours worth of music, that we want to keep people on their toes with us and our songs.” She reiterates the point she made while discussing their songwriting process, saying, “We try to make it where each song is not the same as the last one.”

Teasing once again, the vocalist says, “I guess you can say that we are working on a ‘Party Platter’ of rock.”

As another ten years begin, already on a rising slope of growing success, the possibilities for the group are endless. When it comes to who they want to work with in the future, that door is wide open for anything.

“There are so many people,” Zoe wonders at first as she thinks of the future. “Waterparks are definitely on the list because they’re from Houston just like us and we dig their music. If it’d be possible, we’d LOVE to work with Dave Grohl and hear his thoughts on the cover. Joan Jett hands down as well as Halestorm because we are ALL about girl power.”

With the hopes of many cool collaborations one day in their future, fans still have exciting things to wait for in the meantime. Zoe reveals that fans can expect RōZY’s first original song coming out this fall.

To those fans, who have been so patient and caring in their support for the band, Zoe gushes, “Thank you so, so much for supporting us, both now and back when it was just my sister and I. We honestly are so blessed to be where we are at now and it is all thanks to each of you. We hope you enjoy the new material coming out soon and can’t wait to be performing on stage for you all again ASAP!”

Be sure to watch RōZY’s video for ‘Come as You Are’ here!

Lance Lim on “School of Rock”