Hailing from California, Kylie Hughes couldn’t wait to show off the beauties and treasures that the state held in the music video for her latest single, “Take Me Anywhere.” Under the basis of a road trip across California, Kylie’s romantic tune is enhanced with visuals that allow the viewer to feel like they’re right by her side for the ride.

“Well, the idea of having the audience feel like they’re on the trip kinda came secondary,” Kylie explains about the decision to include the viewer as a character. “I think with shooting the video similar to an authentic road trip, which it was, has that inclusive home video quality. I also chose to have no singing to make it feel more personal and less performance-based. Just looking straight into the camera and letting that specialness just exist.” 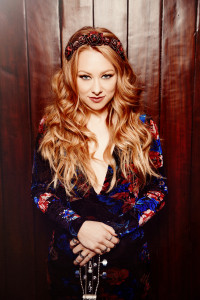 It doesn’t hurt that the cameraman and Kylie had an instant connection while filming, given the person behind the camera is her fiance. “We have always wanted to find a project to work together on. It was really fun and low pressure,” she says about how to the couple balanced work and their relationship during filming. “I think the only time we got on each other’s nerves was the shooting out in the desert at Salvation Mountain. I’m easily (negatively) affected by heat, and it was getting so, so hot out there.” She added that even despite the heat, they were able to work it out

She added that even despite the heat, they were able to work it out, “He’s the most patient person in the world, so overall, it went great.” Giving advice to any couples that would be interested in working together on projects, Kylie shares that it’s important to acknowledge professional boundaries on the clock, “Treat them like you would treat any other stranger; with respect and understanding. Especially in the production world, sometimes even with the best planning, shit just happens. So be collaborative and flexible, little hiccups aren’t anyone’s fault. Be a team and have fun!!”

“My favorite places [to visit are] driving up and down the 1 (PCH) always drops you off into cool little coastal towns,” she mentioned about her favorite spots to explore in California. “I love Summerland, Montecito, [and] Big Sur…just keep me near the ocean,” Kylie exclaimed.

However, there were a few things Kylie wished they could have added into “Take Me Anywhere,” “I wish we could’ve included some snow. We were working around my fiance’s schedule who mostly works in the winter so we couldn’t squeeze it in. But we did get some mountain vibes in there! No regrets.”

With a few songs already on her Soundcloud account, including her EP Calipopicana, Kylie is not a newcomer to music with “Take Me Anywhere,” however, the songs dérive feel, she explains is a great introduction to her as a person. “I just try and tap into that feeling that anyone has when they get the chance to have a getaway with someone they love. I like to put music and lyrics behind things we’ve all felt but didn’t know how to express. But my angle is always that of an escapist, I like the dark in people but I also want to have fun. So, I think you will hear all of that in the rest of my music, too.”

While “Take Me Anywhere,” “just kinda happened” in terms of sound according to Kylie, starting with an acoustic guitar with parts being added later, Kylie says that her music overall would be described as genre inclusive. “I flirt with folk, Americana, alternative, pop, and country because why not!”

She shares her excitement for her upcoming music giving a hint for what we can expect, “It’s my favorite stuff I’ve written so far. I tested a couple different sounds and think I did a good job of picking little things I like from each influence.”

Among some artists that Kylie is a fan of, she says that she would love to collaborate with One Republic, Adele, Kacey Musgraves, or Shakey Graves.

“Immediately, I knew I wanted to pursue songwriting and always being a creative person. I’ve always wanted to be seen as an artist,” Kylie shared her love for music. “Singing my own songs is just extra, but I love the storytelling.” Finishing off with our interview, Kylie also reflected on what she’s learned about herself in the past year. “That I can handle a lot of stress, better than I thought I could,” she laughed.

You can watch “Take Me Anywhere” here.

Dante Brown Talks “Once In A Lifetime” Lethal Weapon Opportunity

According to 16-year-old Dante Brown, getting cast in FOX’s highly anticipated “Lethal Weapon” series has been the moment of a lifetime. With the premiere…