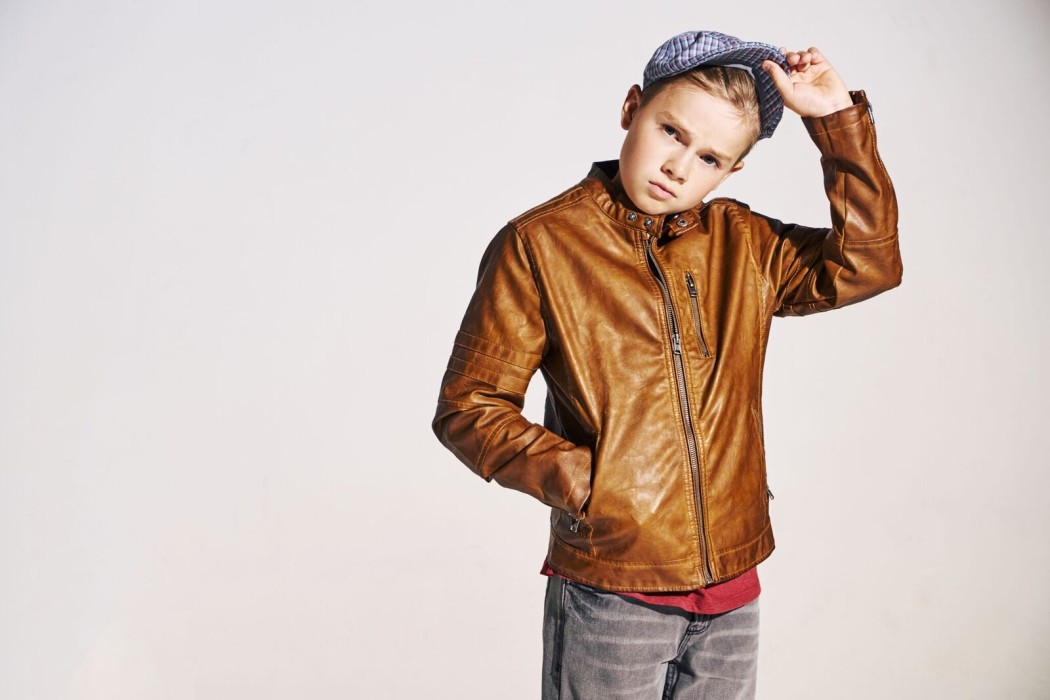 The excitement surrounding Nickelodeon’s newest film Legends of the Hidden Temple has been growing as its premiere date quickly approaches. The movie, based off the 1990s’ television show of the same name, follows three siblings as they are on vacation at a theme park (think along the lines of Jurassic Park). However, things drastically change when they happen upon a secret temple and need to overcome multiple obstacles in order to escape.

Jet Jurgensmeyer, who plays Dudley in the film, helps to carry and boost the excitement for Legends of the Hidden Temple. In fact, he thrives off the excitement that many fans from the original TV show have, not at all intimidated by the following and attention attached to it.

“One of the executives for Nickelodeon, he actually told me what you just did – how Nickelodeon has never done a project like this where it just has such a big fan base already built in,” Jet says in response to Teenplicity commenting on the large fan base. “It was a pretty big show,” he continues, revealing that he’s watched a few episodes to get to know about it. “I can see why kids liked it! It was a lot of fun – it was interesting!” he couldn’t help but exclaim.

“So it’s not so much intimidation, it’s more excitement.”

The first time Jet really got to experience the full force behind ‘Legends of the Hidden Temple’ fans, it was at New York Comic Con. 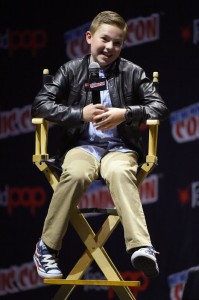 Jet describes the large theater-like area where the cast sat up on stage as a question and answer session began, with two mics set up with lines of people behind each one to ask questions.

“We’d answer as many as we were able to in the fifteen minutes we did it,” he said. He can’t help but gush, “Some of the people had some great questions!”

In fact, one fan stuck out to him and the cast so much. Jet best describes the man as wearing what is like a Tiki head. “He was wearing one of those and we called him the ‘No-Face Man’ because he wouldn’t show his face until he asked his question! But he wore that thing around the entire day and it was so funny! It was the first thing we recognized when we went up on stage. It’s really cool how many fans there still are!”

The fans that have stuck behind the show since its premiere and eventual final in the ‘90s found their curiosity rising when news broke of Nickelodeon’s desire to make a film off of the old series. “Do you remember the moat and ‘The Pit of Despair’? The quicksand and the Shrine of the Silver Monkey? Those are all in the movie.”

With a laugh and the excitement in his voice, the young actor mentions that the movie even included green monkeys, orange iguanas, purple parrots, silver snakes, and red jaguars. “And blue barracudas!” he’s quick to add on. “Oh, that was a tongue twister!” Jet’s voice is able to translate the smile that’s graced his features. “We have them all in the movie and there’s even a little behind the scenes thing that all the walls in the temple are Styrofoam and they literally had artists carve the Styrofoam and paint [it]. There’s heads of the animals carved out of Styrofoam along the hallway. It’s ridiculous how these artists were able to literally carve Styrofoam. Who would have thought you could make such art like that?”

“All those things that kids watched, and did as contestants on the game show – they’re all in the movie and I think that’s something everybody is going to really like.” And all of the excitement that fans have about the movie? Jet feels just the same.

He tells Teenplicity that the film differs from the show slightly, as it focuses on three siblings who are visiting a theme park and get trapped in the temple.

“There’s Sadie, Noah, and then Dudley,” he says, revealing that his character Dudley is the youngest. “Dudley can actually talk to animals! He can speak monkey, mouse, and millipede. But he always says he will never learn snake because he hates snakes and is afraid of snakes! Which makes sense because I’m afraid of snakes too,” says Jet with a laugh. Hardcore fans can’t help but feel like this is also a callback to the Indiana Jones series of films, of which were the inspiration for the design of the game show.

As Jet shares more about his character, he confesses that anyone who has siblings will be able to relate to the predicaments that Dudley finds himself in.

“Being the youngest of three, with two siblings, they’re constantly going back and forth so [Dudley] has to pick and choose whose side he’s on.” Unfortunately, Dudley finds himself flip-flopping between the two. “At first he’s on Noah’s side about being excited about going to this,” the young actor quiets his voice for a moment as he says, “really lame theme park. Then he’s on Sadie’s side because Noah believes in the temple and Sadie doesn’t because it’s just a lame theme park – so they think! Until they get trapped in the temple and then he’s obviously on Noah’s side.”

Jet reveals that Dudley had been really excited to go to the theme park at first but then he’s bored and thinks it’s lame and dumb. “Once they get trapped in the temple, he’s super excited! But he’s not really an adventure type kid so he’ll try to act cool with his older brother and older sister. When it comes to danger and bad guys and scary things, especially snakes, he’s like ‘No way! I’m not doing it! I’m just going to let you guys do all the hard stuff and I’m just going to walk behind!’” 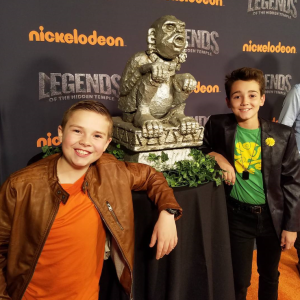 He even says that Dudley is pretty good about making the good decisions on what’s smart and what’s stupid.

“We weren’t allowed to do a ton of stunts but we got to do a lot of running, which is an everyday thing. I’m sure we ran a half marathon through the whole time we were filming.” He describes how Dudley and Sadie get stuck in the quicksand. “It was really cool what they did,” he says. “They had hot water so it was basically like a jacuzzi – it felt so good!” gushes Jet. The actual quicksand was made of a type of pebbled moss that would float on top of the water, according to Jet. “It kind of felt like squishy, wet sand. We had to act like we were dipped in it but we had to be careful because it stained all of our clothes! We had one take to do it and then if we didn’t get it and we had to do it again, it would literally take us twenty minutes to go change because then, if you’ve ever been to a beach, sand is all in your clothes everywhere! It was super itchy because of that!” He reveals that the film’s crew tested himself and Isabela Moner to make sure they weren’t allergic to it and thankfully they weren’t. “But it was itchy because it was supposed to be sand and sand is itchy. But that was probably the most fun thing to do because it was cool – you get to act like you’re in quicksand! Who gets to do that every day?!”

Taking a dip in the quicksand was also one of the most challenging obstacles to film during Legends of the Hidden Temple, as well as the moat scene.

“[The quicksand] was probably the part that everybody had to be very cautious,” he says, calling out the careful work that the lighting and camera ops had to do. “Dudley’s actually wearing – most of his shirt is white and the stuff literally made it turn to the color of mud. Literally dark, dark mud. You couldn’t tell it was white! It wasn’t that deep so I could actually stand up in it so it would only stain like half of my shirt. Then when we hit record, we had to literally sink in it. That’s when we had to be very careful and, if we did have to do it again, without getting us out and changing, we would just kind of pull more of the mossy stuff over to try and cover it up. It’s went pretty well but it was probably one of the most challenging parts! And working with the animals!”

Jet dishes that there were real jaguars on set. The kids on set weren’t allowed near them, which they were happy about, he tells Teenplicity with a laugh. “We were like in a separate building [and] up two floors before the jaguars were even on set so it was very safe.”

Another difficult, but fun, obstacle to film was the moat scene and Jet reveals that it’s because they actually fell in the water one time. “But it wasn’t cold water!” he exclaims. “We were in California for those days so it felt good to get in the water. I’m really excited for fans to see [those] scenes.”

Teenplicity couldn’t help but ask what team Jet would have loved to be on during the original show and he says that he came up with a new team at Comic Con.

“My favorite color is orange but I love monkeys. So I said either the Orange Monkeys or the Green Iguanas. But if I had to pick one of the teams [from the show], Blue Barracudas or the Green Monkeys.”

Who would Jet pick to be on his team? His costars of course!

(Let’s be honest, three members per team would have made the temple so much easier.)

“Colin Critchley and Isabela Moner! I mean, we got through the temple – now that we did the movie we know all the stuff about the temple!” That could work to the group’s advantage, as well as the fact that they bonded over the show. “We became obsessed with the game show,” Jet says. “It was pretty cool! We were filming the movie and we became obsessed with the show.”

The adoration and enjoyment that accompanied the filming won’t stay exclusively on-set, as Jet is sure that everyone will love the movie.

“I think everybody is going to love the whole movie but it depends on what the fans loved the most about the game show. I’m definitely excited for fans to see the quicksand,” he enthuses, admitting that, at the time of the interview, he hadn’t seen the final version of that scene yet. “It was fun to film so I know it’s going to turn out great. But really the whole thing. I think everybody’s going to love it all.”

For those still on the fence, Jet describes what the film is like in hopes to get others tuning in. “It’ll put you on the edge of your seat. Maybe intense,” he describes at first. “Funny. Dudley’s kind of the kid that’ll have a joke every now and then and will lighten up the mood. It’s a great movie for the family – everybody’s going to love it. It’s not like any other Nickelodeon movie.”

Legends of the Hidden Templeairs this Saturday, November 26, 2016 on Nickelodeon at 8PM!

The power of art lies in its ability to reflect the truth and envision something better. When art manages to strike that balance, it…