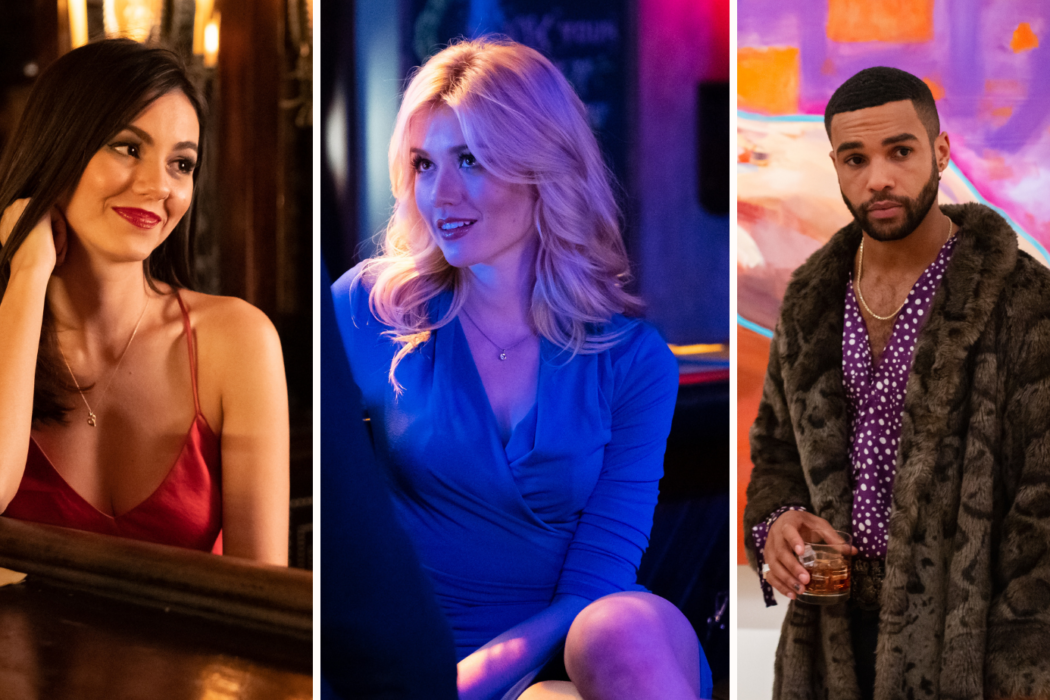 Available in select theaters and on-demand tomorrow, Trust tells the story of the complexity and fragility of relationships.

When gallery owner Brooke (Victoria Justice) recruits rising artist Ansgar (Lucien Laviscount) for an art show, the man’s flirtatious nature and affinity for married women rattles her relationship with her husband Owen (Matthew Daddario). As doubts and insecurities creep in, so does Amy (Katherine McNamara), a journalism student who takes a special interest in Owen.

Last week, TEENPLICITY had the opportunity to speak with Victoria, Katherine, and Lucien about their characters in the film, translating the play Trust is based off of from stage to screen, and what it was like to work with old friends.

Within the film, the characters are so different from one another and their clashing personalities only add to the complexity of the film and its microscopic look at trust in a relationship. Each character faces a major choice and has to face the consequences of their action, or lack thereof. With every decision made, the journey develops deeper twists and the characters unveil more of their true selves.

“I would describe Brooke as… determined, driven, and…” Victoria begins. She pauses for a moment as she thinks. “And kind; I think she’s a good person.”

“I would say that Amy is driven, smart, and cunning, for better or worse,” Katherine adds about her own character, Victoria voicing her agreement with the assessment.

Lucien is full of confidence as he breezes through his answer, describing his character Ansgar by saying, “A whirlwind. Future. And a great laugh.”

Though Owen plays as the romantic interest (of sorts) for both Brooke and Amy throughout the film, Katherine is eager to point out that the film doesn’t pit the two women against each other as rivals for his affection. The tension that’s created between their characters runs deeper and makes each person question their own motives and decisions.

“Even though they may be at odds, their relationship is much more complex than the surface thing that you can often see and I was really drawn to that as well,” Katherine says of Brooke and Amy’s dynamic in Trust. “[I’m happy] Vic and I were able to bring that to life,” she adds with a grin.

Adapting the play Push for the screen, the cast of Trust thrived in being able to fully explore the environments and scenes in ways that the stage sometimes limited.

Katherine says, “What I love about stage plays so much is that it’s so much about the characters and about the relationships, because you can’t fully go to different places and fully physically portray everything when you’re on the same stage. We were able to do that in this film, but it still kept that integrity of focusing on the humanity and the relationships and the characters, and their intricacies and the complexities therein that really carry the story through. I was so glad we got to preserve that from the original piece.”

Victoria agrees with the sentiment before Lucien echoes his agreement.

“I think it’s beautiful, the idea of the connection between people,” he says, pointing out the small cast used for the film. Keeping the cast to a small number allowed the focus to remain on the different relationships at the center of the film. “These are people interacting how people would really interact,” Lucien says, praising the dialogue in the film before moving forward to shower his praise on his castmates. “These girls smashed it!”

Victoria adds a quick shout of, “You crushed it!” before Lucien continues.

“I’m super proud to be a part of this with these guys. I really am.”

The three co-stars don’t forget the missing person of their foursome.

Trust showcases the second collaborations of Matthew Daddario & Victoria Justice and Matthew Daddario & Katherine McNamara. Discussing with the actresses what it was like to reunite with a beloved co-star, TEENPLICITY also asked Lucien how it felt to join a cast in which his co-stars were already familiar with one another.

“I feel like a newcomer. Oh my God,” he says with a laugh. He jokes for a moment as he adds, “I feel like the new kid in school who gets all the attention!” Lucien quickly turns serious as he continues on. “Obviously Matt’s not here right now but to work with these women right here – it has been a Godsend to me. I’ve learnt so, so much.”

The actor jokes as he points to the large pink sunglasses sitting in front of him that he wore for the beginning of the interview, saying that he could sit there with his glasses on and enjoy himself. “[I can] have a great time because I know that I created something really incredible with these people and to be honest with you, that’s all that matters. We created magic together and I believe it, I lived it, and we went there. I think Victoria went there and Kat went there, and that’s all that matters.” He sends a special thanks to director Brian DeCubellis for giving him the opportunity to work alongside this cast.

Katherine nods to his statement and says, “Yeah, it’s so true.” She expresses how Brian gave them such a great group to work with which, for her, included her longtime television co-star and friend. “I love working with Matt. He’s like my big brother and we worked together for, gosh, probably about four years on Shadowhunters. We have a shorthand almost that makes it a lot of fun when you’re in a situation where you have a lot of witty banter and you have a lot of intimacy and things where you really have to trust each other and jump off that cliff together and hope that some good comes out of it.”

The actress laughs as she says, “For lack of a better word, being there with someone you trust and someone you know has your back is the biggest gift.”

For Victoria, working with Matthew again has allowed her to reflect on their journeys as actors.

“I loved working with Matt when I got to do Naomi & Ely’s No Kiss List with him. We had so much fun and he’s just such a down to earth, cool, talented guy,” Victoria says. She recalls speaking with the director of Trust and how he asked her if she had any ideas of who would be good for Owen. “The first name that came to my head was Matt Daddario,” she says.

Victoria continues, “I’m just so happy that we were able to do this together and to kind of reconnect again after all these years was really fun. We absolutely killed it, and it’s just fun that we kind of came full circle together.” Expanding on that, the actress says, “Naomi & Ely’s No Kiss List, we were younger and it was like this sweet, young, budding relationship. And in this movie, it’s a more mature, adult relationship and we’re kind of falling apart and we’re talking about having children and it’s just cool. To see that timeline is really fun.”

TEENPLICITY asked the cast who they would trust in different scenarios. See what they had to say below! 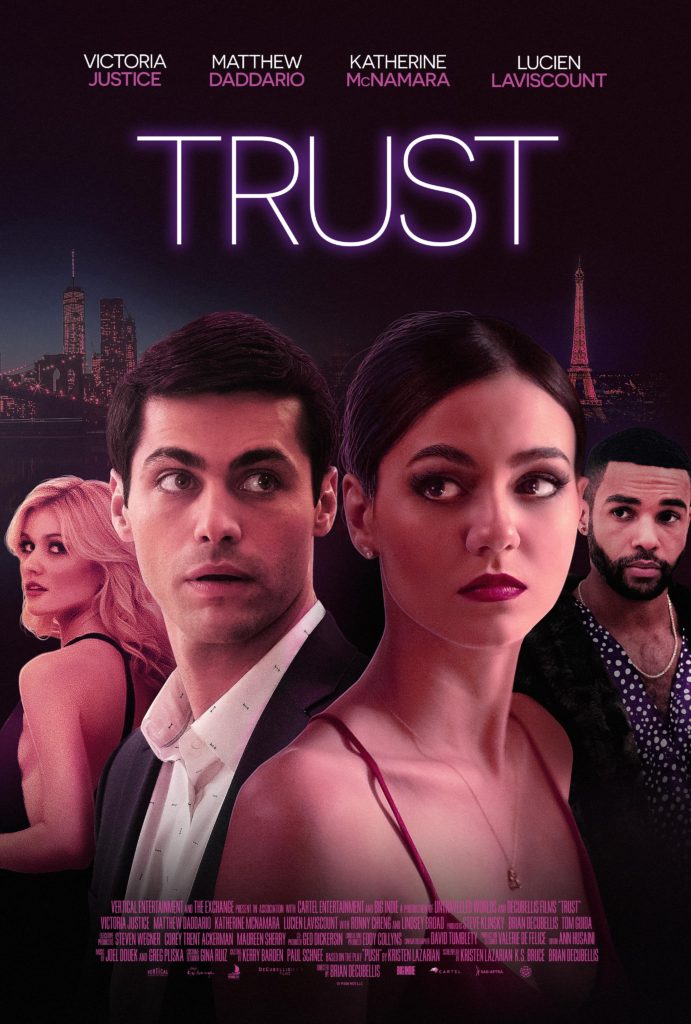 Jessica Morale Is On the Hunt

Jessica Morale’s social media bios describe her as a music maker and songbird. And like her music, she invites people to see the “inner…