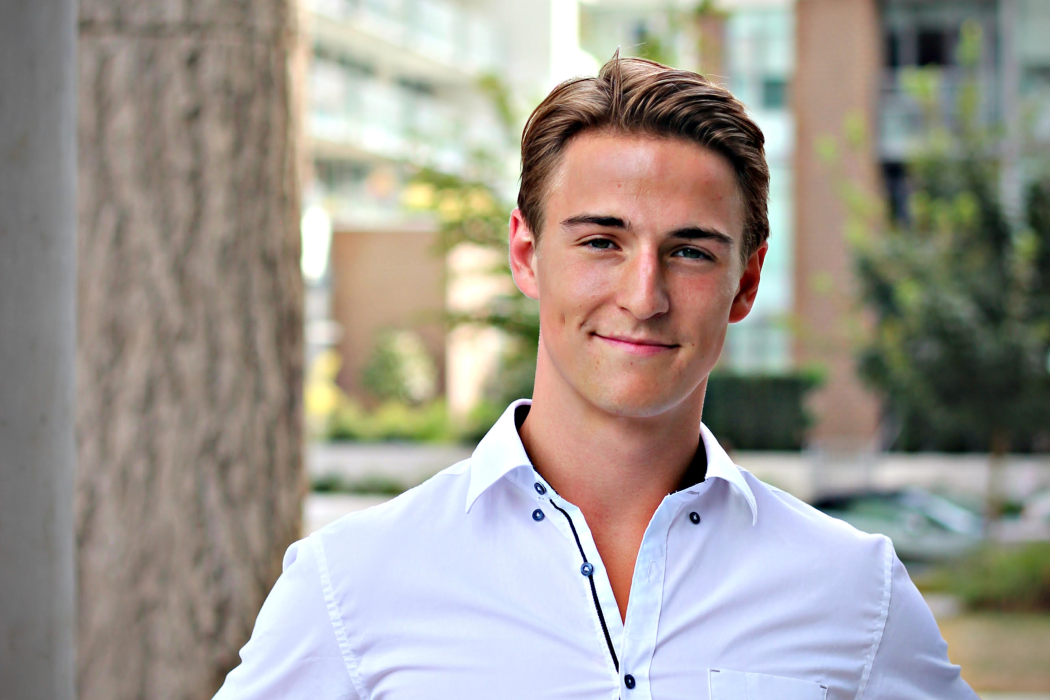 When ABC’s mini-series When We Rise premieres on the network tonight at 9PM, it will be the first of four nights that document the struggle and progression surrounding the gay and transgender communities following the Stonewall riots in 1969. The seven-part series chronicles these major events through the eyes of Cleve Jones, an AIDS and LGBT activist whose 2016 memoir of the same name is the basis for the show.

Evan Roderick stars alongside Guy Pearce, who portrays Cleve Jones in the mini-series, as Kurt. Going in, Evan says his part was much more straight forward than some other recent roles. He admits that he knew his part would be a supporting role that helped illuminate the main character – Guy’s character in this case. “I knew that was going to be the case and I just wanted to do anything I could to make it easier on him,” the young actor says.

Describing his character, Evan says, “Kurt is the assistant at a doctor’s office in the early 90’s, where the HIV/AIDS epidemic is well under way. He’s a guy that has to confront these issues head on every day and serves to console men and women trying to deal with this brutal condition.”

When We Rise is the first time Evan worked on a project of such a great size and magnitude. “Rolling up to set for the first time was like being immersed in a different world,” says the actor. “Just this large community of people coming together. It’s incredible to see how much work needs to be put in before we hear ‘Action’.”

The mini-series is airing on the heels of a growing hostile and divided environment between the President of the United States and the people as the former, who had promised to protect the LGBT community from violence, rescinded the protections put into place by former President Obama’s administration, which allowed transgender students to use the bathroom that correlated with their identity.

“That probably depends on who you ask,” Evan answers when Teenplicity asked if this current political climate adds pressure to the re-telling of past events which continue to be relevant and applicable today. “There’s of course all the expectations that come with the re-telling of a story. As an ensemble, I think everyone feels a bit more pressure to portray these events accurately more than anything.”

However, Evan continues, “That being said: if it’s not entertaining, people won’t watch it. So in my opinion, that balancing act is where the difficulty lies with a project like this. Someone like Dustin [Lance Black, writer on When We Rise and previously Milk] has a tendency to write about events that have already taken place, so he seems to have found a certain process with regard to translating these projects on screen.”

With such an incredible crew, in front of and behind the camera, the young actor says everywhere he turned, he was learning something new.

“It was the first time I really had the chance to work with A-list actors/writers/directors. Working alongside Guy Pearce and Dylan Walsh was eye opening. These guys are heavy hitters in the industry,” he gushes. “To see how they approach their work and the level of professionalism they bring to a project really gave me a fresh perspective as to what it takes to build a career in this industry. Not only that, but having the opportunity to watch them before our scenes just reaffirms that their confidence comes from preparation.”

Project Mc2 premiered its Part 4 special ‘A Royal Pain’ which allowed Evan to play a darker role – that of a villain. Playing Prince Wendell, brother of past series favorite Prince Xander, Evan describes his character as very intelligent and deceptive.

“Being a man of privilege, [Wendell] has this arrogance about him – this sense of entitlement.” He explains that it’s always interesting for him to develop a character like this. “Where you’re encouraged to express all the darker facets of yourself and have no repercussions,” he says. “Elements of jealousy and hatred… it’s really quite fun.”

What is great fun for the viewers of Project Mc2 is the contrast between the two brothers. “One of the things that production wanted to focus on before we began shooting was the contrast between Xander and Wendell. Siblings often tend to have very different qualities, which is almost always the root cause of family tension. Xander has this easy sort of charm and confidence where as Wendell is this malicious, conniving kid that will do anything he can to have a hair of the love and admiration Xander so easily receives. Casting and production really wanted to make sure that Wendell, was in many ways, the inverse of his older brother.”

In fact, Evan perfectly describes the role his character plays throughout the episode.

“It’s funny because at first, Wendell seems like this distant character that may or may not have too much to do with the plot,” he says, as his character is only seen briefly in the beginning via a video message. “But as Part 4 progresses, it becomes evident that he’s very much involved and even in control to a greater or lesser degree.” This is expressed as Wendell reveals himself to be the cause of the growing negative public image of his brother Xander as well as the mastermind behind an even worse plot. For fans that enjoyed his appearance, a return is up in the air for now, according to Evan. “It has yet to be determined if/when he will resurface.”

While that is still being worked out, Evan is able to look back and remember the great environment that he experienced while on set. “The energy, the optimism, the youthfulness!” he exclaims, giving some prime examples. “It’s so important for a show like this because that energy translates to the screen which translates to the viewers at home.”

It’s hard to believe that Evan almost wasn’t able to contribute his energy to his acting projects as he nearly pursued professional hockey instead.

“There were so many factors in that decision,” he says of his choice to leave hockey to act professionally. “It’s not exactly a breeze to explain but I suppose it’s much like marrying too young,” he describes. “In this case, 15 years going steady… you know, you do everything together – grow together, fail together – only to discover maybe you didn’t have that much in common in the first place,” reflects Evan. Once strongly considered for the NHL draft, he confesses that he felt trapped in hockey, like he couldn’t express himself through it. “I think that was evident in the latter part of my career. Some self sabotaging goin’ on, whether I was aware of it at the time or not, I started to get injured a lot and realized I just had to pull the trigger. Quit and do what I always really wanted to do – act.”

What Evan wish he knew when he started acting is something that cannot just be told to someone. “That it can all be done,” he states. “It’s something I had to learn by actually working at the craft. At first, I suppose I was slightly tentative towards the whole industry and questioned whether or not I was capable of doing this for real, but after a while you start to learn the ins and outs and realize, ‘Of course I can do this.’ You can only read so many self-improvement books before you realize they all boil down to the same two words: take action. I really just wish I understood that from the get-go.”

As he practiced his craft and worked with varying groups of people, the young actor says the most valuable thing he’s learned about himself and people in general is that they’re constantly growing and changing. “The more I can surprise myself with new projects, the more fulfilled I’m going to be,” he says, “and the more I can evade being thrown into boxes labelled, ‘This is what Evan can do’ and ‘This is what Evan can’t do’.”

There’s nothing, per se, that Evan believes he can’t do. Even his dream project is already in the works.

Telling Teenplicity that he actually just finished writing the first draft of his dream project, he teases, “It’s a screenplay that I’m now revising with another actor/writer Neil Webb. It’s a story I began developing about a year and a half ago now so we’re hoping to get producers and a strong cast tied to it over the next 12 months. I won’t give too much away but it’s a story about today’s pop culture and the influence of music in our society.” He adds, “Of course with elements of a love story!” Evan even reveals that they’ve written all original music for the film too. “It’s been a wild creative process!” he says. “We’re confident people will want to pay to see it. Only time will tell!”

For those whose hearts can’t take waiting that long for another of Evan’s projects, the actor says that 2017 has started off very busy for him. He says that he’s just finished shooting a teaser for a feature film called Tributum, directed by Jordan Brown.

“The plan is to shoot the full feature film in the summer I believe, although I’m not sure how much information I’m really allowed to disclose about that,” he says of the movie. “Other than that, Vancouver seems to be having another record year so there’s no shortage of filmmaking in this city. I’m just excited for what’s around the bend!”

When We Rise airs Part One tonight on ABC at 9PM. Parts Two & Three will air on Wednesday night, Parts Four & Five will air on Thursday night, and the mini-series conclusion with Parts Six & Seven will air on Friday night.