Releasing new music is an adventure like no other. Excitement and nerves meld together in the perfect combination of anticipation for a new song, EP, or album to drop. Kerri Medders knows this idea all too well as she waited for the release of her new EP ‘Lot 17’.

“I was just excited and antsy about the release,” she says of her mindset just days before it became available for her fans. “The project means a lot.”

As her sophomore EP, ‘Lot 17’ manages to capture listeners in a balance between the past, the present, and the future. The past is best encased in the sound, especially in songs like “Slipping” and “Don’t Give In”. It contains enough of a pop-techno sound to make it feel like a blast from the ‘80s but Kerri’s personal touch gives each song their own presence in the modern-day. While the lyrics fit the mold for the present, as each song tells it’s own story, the EP tracks are listed in such a way that it gives listeners the pathway to follow the story of the relationship that is being told. The past, present, and future all converge in the best way possible through Kerri’s voice. The lightness that it contains has the ability to bring listeners through her memories of being 17 while giving a little nudge of hope and curiosity for the future.

“It’s thrilling to know I’ve created something different, but also honest to my artistic ways at this moment,” she says of the new sound her EP took on compared to her older work. “It does make me a little nervous not knowing what reaction I’ll get from people, but I’m so proud of these tracks; I had to share them.”

Kerri’s second EP not only has a different sound than her first but it also contains a more vulnerable side of the talented young singer. “They’re all experiences that I couldn’t stop thinking about,” she reveals about why she chose these four songs in particular. “They pulled hard on my emotions when I was creating this EP so I let it flow through me instead of trying to fight it. They’ve really made me who I am, right now, at 17.”

She goes on to say, “I think [the biggest challenge] was being honest and learning to really let myself be vulnerable. This is probably my first EP [where] I’ve deeply started opening up.” Kerri reveals, “It’s opened my eyes to connect more with myself and the world.”

The experiences she shared on ‘Lot 17’ and many others from being 17 have given her so much to work with as an artist as well, according to Kerri, and they’ve shaped her visions for these creations. “I honestly can’t wait to just keep letting life happen to me to tell about it,” she enthuses.

Fans will notice the absence of her single “Who R You” on the EP. Released earlier this year, Kerri ultimately decided that this song, and a few others, didn’t make it on the EP because they didn’t fit the story she was trying to convey.

Nearly two weeks since the release of her second EP, the singer cannot help but gush over how amazing the great reaction from fans has felt for her.

“Everyone seems to dig the new vibe and sound we’ve created. Right now, I’ve heard that ‘Cry, Cry’ seems to be a fan favorite. And it’s mine too!” 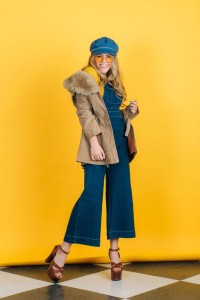 The heavy ‘80s influence that can be heard on “Cry, Cry” as well as the rest of the EP just naturally came that way, according to Kerri. “Pure coincidence,” she goes on to say. “I didn’t realize I was even creating all these ‘80s inspired tracks until the end product; I was so wound up in the lyrics and flow of each particular sound.” However, she has no complaints about the comparisons or the way her EP sounds. “The ‘80s are known for grooves and vibes and that’s what I’m all about.”

Covering Whitney Houston on ‘Lot 17’ came more from her personal experience with her music than an attempt for an ‘80s type of EP.

“It was the very first song I sang when starting vocal lessons when I really knew that I wanted to start music,” she says of picking “How Will I Know” over “I Wanna Dance with Somebody”, which was another contender for her EP. “I had such a strong connection with ‘How Will I Know’, I just knew I had to include it.” The singer recalls, “It reminds me of where I started 10 years ago to where I am now.”

It could be her connection to the song in addition to her confidence about making it her own that eliminated any nerves that would accompany many other artists when it comes to covering a music legend like Whitney Houston. “I did rerecord the track because I wanted it to be perfect to my expectations of myself but overall, I didn’t want it to be a version of me as an artist attempting to be Whitney,” explains Kerri. “I wanted it to be my own version and spin on the classic while paying tribute to the legend.”

Whitney Houston is as far Kerri goes when talking about inspiration from the ‘80s in creating ‘Lot 17’. She tells Teenplicity that the inspiration for the sound of the EP came more along the lines of more modern bands who “grooved hard”. She cites The 1975 and Tame Impala as examples.

Kerri states a mini tour for ‘Lot 17’ as one thing she hopes fans can expect from her in 2017, as well as more visuals.

“And more music, of course!” the talented young artist adds. The excitement is already building.

Given the ‘80s sound that accompanies the tracks on ‘Lot 17’, Teenplicity asked Kerri Medders to create a five song ‘80s playlist. These are the tracks she’d include on it!

‘Lot 17’ is available to stream on Spotify and for purchase on iTunes and all other streaming sites now!

“Point 453” and Using the Youth Voice to Discuss Bipolar Disorder

Written by Ethan Paisley, writer/producer of Point 453 || @ethanbpaisley Read our review of Point 453 here Point 453, in summary, is a feature-length film that exemplifies…