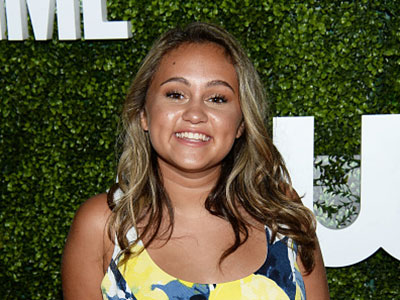 Young starlet Mary-Charles Jones describes what fans can expect in season two of “Kevin Can Wait” and a few stories of what happens behind the scenes.

When Kevin James [Paul Blart: Mall Cop, “The King of Queens”] announced a return to comedy television, the anticipation grew for what his show would. His new series “Kevin Can Wait” follows a man named Kevin who recently retired from the police force and must adjust to what life has become.

In the second season, fans learn the devastating news that Kevin’s wife Donna has passed. Mary-Charles Jones explains that in the universe of the characters, a year has passed since the tragic event that occurred off-screen during hiatus.

“Viewers will see Kevin navigating life as a single dad,” explains Mary-Charles. “You will also see Kevin re-enter the workforce as he teams up with [Vanessa, played by] Leah Remini [“The King of Queens”, “The Exes”].”

She goes on to say, “Kevin as a single dad is very funny.” Much of that comes from him struggling to balance returning to work and singlehandedly running the household.

Best known for her work on “Hannah Montana” and in Dear Dumb Diary, Mary-Charles is able to bring her own form of comedy to the series, which hosts talents of new and old who have resumes and personalities to back up their skills.

It’s like going to a master class in comedy.

“Sara is a young athletic teen who is just trying to make it through high school,” says the actress. “Sara is not extremely academic and prefers the athletic field to the classroom. She is the middle child who has a special bond with her father.” Despite that special bond, it doesn’t always allow her to open up to her father. “As the middle child, Sara doesn’t really show her emotions – she tends to bottle things up.” Sara does still have some sweet moments with her dad as she continues to deal with the loss of her mother.

When asked how Sara will react to Vanessa, Mary-Charles says that while the cast are only six episodes into filming, she believes the relationship between the two has “so much” potential to grow. “Leah is absolutely wonderful to work with,” gushes Mary-Charles. “She is so funny and kind to me. I love going and hanging out in her dressing room and we recently set up karaoke in there so we can jam out together.”

The young star describes Leah to be a great actress and reveals that she loves watching her and Kevin in scenes together. “It’s like going to a master class in comedy.”

Going forward in the second season of “Kevin Can Wait,” viewers will see Sara go through the ups and downs of high school in addition to navigating her teenage years without her mom by her side. “Kevin as a single dad leads to some great comedy,” Mary-Charles adds.

“The teen years offer so many storylines,” Mary-Charles enthuses. She examples, “Learning to drive, boyfriends, high school dances, and all the normal high school drama.” There are so many that Mary-Charles wants to explore with her character Sara. “I can’t wait to see what the writers have in store.”

Off-screen, she describes the atmosphere to be extremely fun and relaxed. “We all love to joke around even when the cameras are off. It’s really one big family.”

I love the energy and people of New York.

The cast is such a big family that they enjoy being able to hang out when they’re not filming. Mary-Charles recalls a time when her and some of the cast went bowling and to laser-tag.

“It was so fun just to hang out with my cast mates outside of set,” she says happily. “Leonard Howze [Barbershop, “Memphis Beat”] won bowling, but I think I got third.”

One thing in particular that sets this series apart, besides its cast of stellar comedic actors, is the fact it actually films on the East Coast instead of the standard West Coast studios. “The weather would be the biggest difference!” Mary-Charles points out first when comparing what it is like filming on either coast. “Never have to cancel filming due to snow on the West Coast!” she adds with a laugh. “I love the energy and people of New York. It has been great filming here.”

Nearly every show tapes in front of a live studio audience on its location in Long Island, which she enjoys due to the great support Long Islanders have shown for the series, calling it amazing.

“It is great that all of our live shows are full and the fans are always excited to support us.”

“Kevin Can Wait” airs every Monday night at 9/8c on CBS!