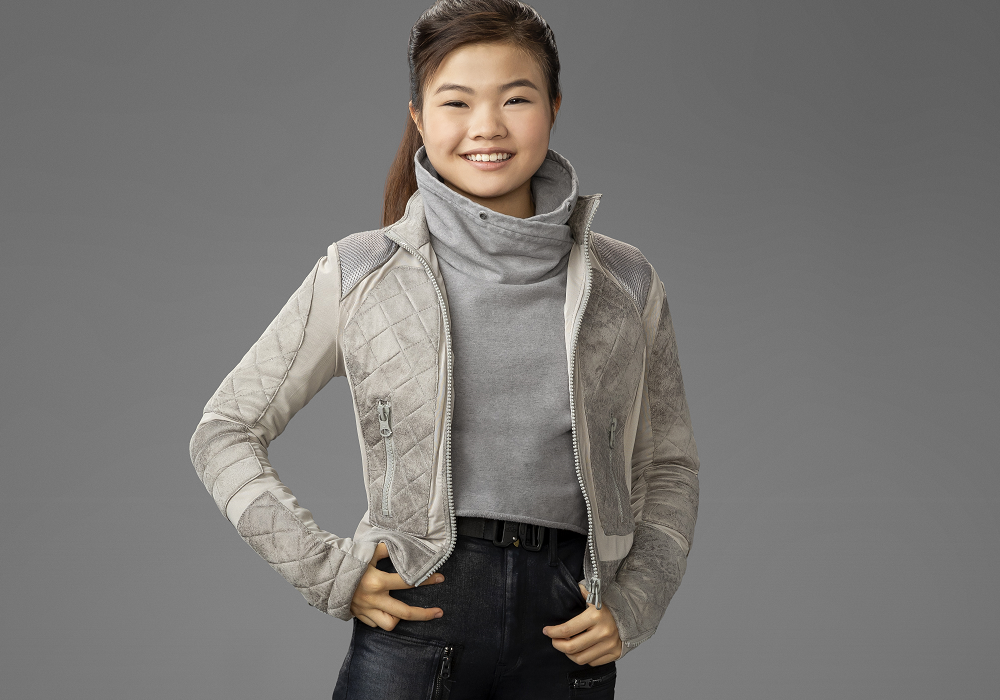 As Nickelodeon’s newest series The Astronauts rocketed onto television screens last night, it established itself as premier entertainment. A collaboration with Imagine Kids+Family, the series delivers on a theatrical level, exquisitely landing each point set up from its perfect launch.

Miya Cech portrays Samantha ‘Samy’ Sawyer-Wei, the daughter of a decorated astronaut who was initially planned to be on the Odyssey II launch.

The actress is a big supporter of increasing Asian American representation in media, as well as the Asian American Girl Club, and she understands how important her role is for other kids who are watching.

“The Asian American Girl Club is so important to me because it provides a platform for girls like me to gather, share stories, and inspire each other,” Miya says of the company. “My friend and mentor Ally Maki is a boss. She is so inspiring and generous to provide a place to celebrate Asian American female empowerment.”

She brings that empowerment with her as she takes on the role of Samy in The Astronauts. 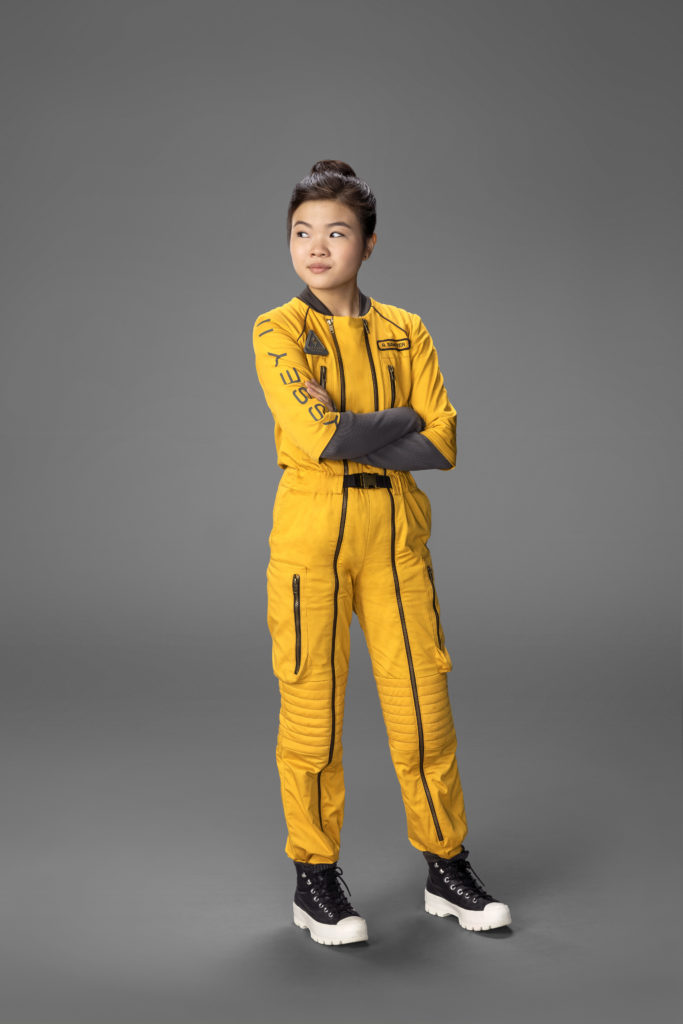 “It is incredible and so humbling for me to represent a strong Asian American character like Samy. Not only is she a total tough girl, she is also smart and hardworking. She is all about girl power first and foremost,” says Miya. “What I love most about the script is that her ethnicity is never even mentioned because while it’s a part of who she is… it doesn’t define her. Her strengths and intelligence and heart define her. I hope more than anything that Asian American kids see themselves in Samy and are inspired to follow their dreams.”

Though her character finds herself accidentally launched into space with four other kids, all of them not formally trained as astronauts, Miya still finds some similarities with her. “Samy is a lot more straightforward and decisive than I am. She’s also a lot more series. But there is a lot of Miya in Samy as well,” she says. “The best part about getting to play an original character, as opposed to a rebooted or storybook character, is that you have the freedom to tweak the role and bring your own uniqueness to it.”

Describing the series, Miya says, “The Astronauts is a sci-fi adventure that’s unlike anything else on Nickelodeon, or kids TV in general. It’s fast-paced and cinematic. Every episode feels like a movie and makes you believe you are actually in space with the Odyssey II crew.”

The premiere showcases this point perfectly. From its high stakes to the incredible pulls at viewers emotions, the beginning of the series has launched expectations high for the following episodes.

Within the show, Miya’s character Samy also faces some high expectations, though that mostly comes from herself. She pushes herself to complete tasks that no one else thinks possible, and she immediately puts the rest of the crews’ safety first on her priority list.

“Samy is the daughter of a famous astronaut who is the captain of the Odyssey II,” the actress says of her character. “She’s a prodigy, very smart but also introverted. But she really finds her voice on this journey.”

Finding her voice stems from taking charge of the dire situation at hand. The most knowledgeable on the ship regarding the tasks needed to be done to survive, Samy immediately gets to work. “Samy takes on the ‘Captain’ role by default because one of her mom’s is an actual astronaut and she has been following in her footsteps since she was a little kid,” explains Miya. “She seems a bit standoffish and untrusting at first. But like all of the kids, she learns that they all need to work together as a team to survive.”

Given that these kids didn’t know much about each other prior to their unplanned space mission, the dynamics between each of the friendships are still developing and figuring themselves out.

“Samy brings almost a parental role to the group where there is no adult figure for these kids to look to for guidance anymore,” the actress says of how her character fits in the group. On how the group affects Samy, Miya continues, “While she is good at being a leader, what she needs most from the other kids is to learn how to be more carefree and young and trusting. That’s what they bring out in her.”

Already having faced two life-or-death situations, the crew has managed to pull together by the last second to get through relatively unscathed. As they continue to find themselves further and further from home, and uncertain of what lies in their futures, the group is forced to adapt and change. “Each kid goes through their own character arc throughout the season. While the group starts out as an unlikely team, they learn to grow as a team and as a family.” 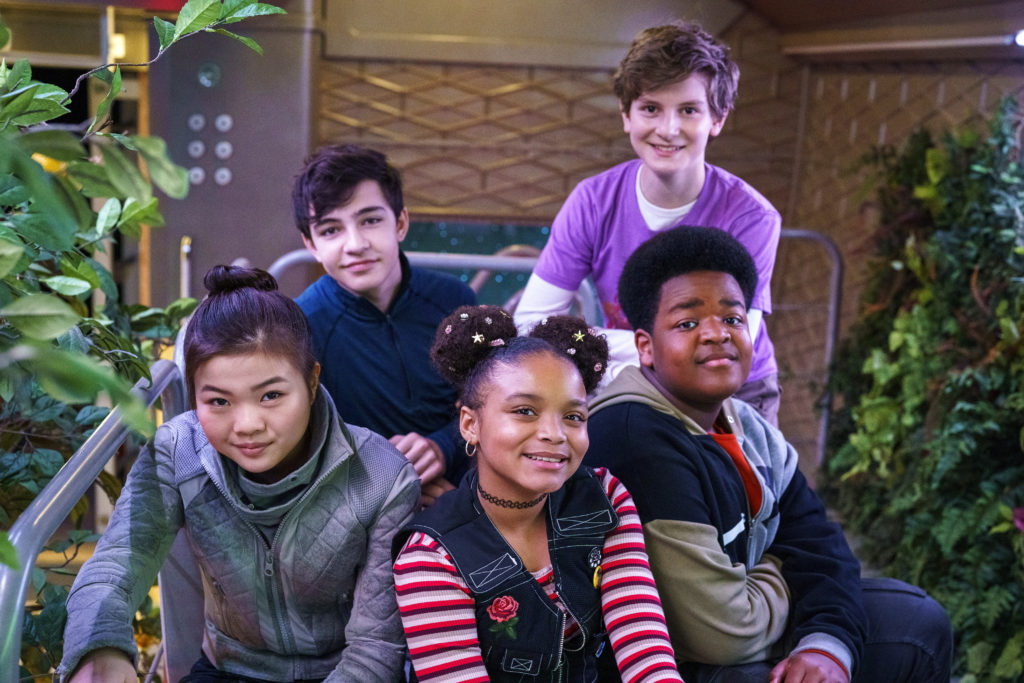 One activity that the entire team got to experience together was floating in space. For the cast, portraying that zero-G environment was just as fun.

“The zero-G work was my favorite,” Miya reveals. “I loved being able to pretend like I was floating while hanging from wires. It’s almost like dancing in the air. My favorite scene was flying through the spinning spine of the ship.”

Given the wire work used behind the scenes of the show, on top of the physicality needed to portray an astronaut, Miya got herself readily prepared to take on the role of Samy.

“This role requires a lot of physical training. I worked out, did a lot of cardio and yoga to build my core strength,” the actress says. “As for the astronaut training, I watched movies like Apollo 13, Space Camp, and The Right Stuff to prep for the role. We also go to talk with Chris Cassidy who is a real astronaut and just came home from the International Space Station.”

Unlike her roles in Are You Afraid of the Dark? and Always Be My Maybe, The Astronauts has Miya’s character not only spending a majority of her time in space but also includes a fair amount of stunt work.

“Every role I have played has been a unique experience for me. The Astronauts is super unique because of the space element and it’s the first time I’ve done most of my own stunt work.” Miya adds about her role, “Also, the importance of a strong Asian American lead role is not lost on me. Samy is not only a strong Asian lead, she is also the daughter of two moms.”

Miya takes the weight of what her role represents seriously and hopes to do the best she can when portraying Samy. “I am so grateful and proud that Samy and her moms represent and celebrate a diverse family, and I hope to see more roles like this in the future.”

When speaking with the cast of Nickelodeon’s The Astronauts, there were a few questions that every cast member was asked. Here are Miya Cech’s answers to those questions!

MIYA CECH: The rumor is that it rains diamonds on Saturn and Jupiter, so I’d love to see that!

MIYA: I love the cockpit because it looks and feels so real. When we are filming scenes in the cockpit, I feel like I’m on a real spaceship.

MIYA: The spine was my favorite place to film.

MIYA: I’d want to play Will because I rarely get to play a funny character. I’m not the best comedian but I’d love to try a comedy one day. Also, because Will brings levity to the group.

MIYA: I can’t wait for people to see how cinematic and magical the show is. I think they’ll be blown away by what Imagine was able to create and I hope that they truly feel like they are going to space with us!

New episodes of The Astronauts airs Fridays on Nickelodeon at 7pm ET/PT.