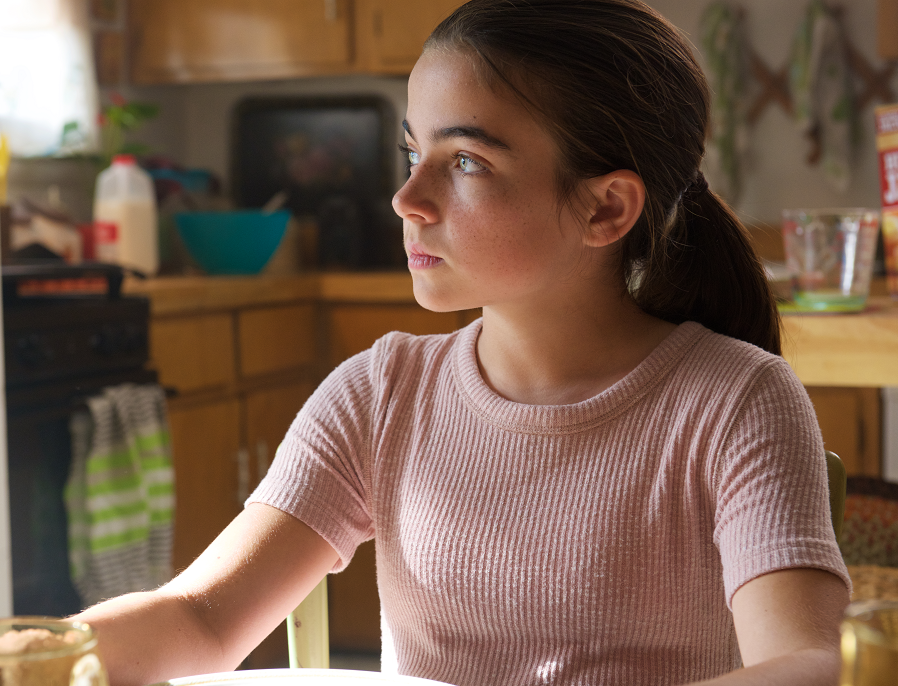 In a film with a number of coveted stars, Taegen Burns is able to command the screen when she enters. She develops her own dynamics with different characters in the film and leaves her mark in each scene she appears.

Starring in The Gateway, Taegen holds her own in scenes with Shea Whigham, Olivia Munn, and Bruce Dern as the film dives into the underbelly of a drug trafficking ring within a city as well as the systemic issues within the foster system and how both impact and shape the children affected by them.

The actress says of the film, “The Gateway is kind of gritty. You’re always wondering what’s going to happen next. There is a social worker Parker [Shea Whigham] who has been assigned to take care of me and my mother. We [explore] how far does this social worker Parker want to go to helping and protecting us from my [character’s] dad who’s recently gotten out of prison.”

In the film, Taegen portrays Ashley, the daughter of Olivia Munn’s Dahlia and Zach Avery’s Mike, who is unknowingly placed in the middle of her father’s drug deals. Mike gives Ashley a package of drugs, telling her it is a secret gift for her mother, and asks her to pass it along to his friend for him. However when things don’t go as planned, Ashley, Dahlia, and Parker find themselves on the run.

“My character definitely has a tough exterior,” Taegen says of Ashley. “She’s also independent. She takes care of herself; she doesn’t really need anyone. [Dahlia is] a single mother, so [Ashley’s] very protective of her and cares about her a lot.”

Taegen’s character isn’t the only one protective of her mother. Parker, the family’s social worker since Ashley’s father went to prison, grows closer to the family throughout the film and has a particularly fun dynamic with Ashley. “Shea was a great person to work with. I learned so much from him,” she says of Whigham. “I think exploring that relationship with him, you can see it develop throughout the movie. When we first meet him, [Parker] is a social worker so he’s here to watch over me and is like, ‘Can Dahlia take care of me?’”

The actress adds that while in the beginning, there is definitely a hesitance that is factored into Ashley & Dahlia’s relationship with Parker, the bond between the three of them grows stronger as the film progresses.

She recalls how the film was shot a few years ago and, despite her young age, the two actors didn’t treat her as a kid with no experience or someone didn’t know what they were doing. “They treated me as an equal and they saw me as someone filming who wanted to learn and wanted to get this done,” Taegen continues. “They definitely helped me learn new things and they were so welcoming. It was just amazing working with them and I’m so glad I got to.”

It helped that they were so welcoming to her since during most of her time on set, she was the only kid there. “I definitely didn’t feel alone. I didn’t feel like, ‘Oh, I’m the only kid, no one’s going to talk to me. I don’t have anybody.’ I really developed a friendship and relationship with Olivia and Shea; it was so great,” Taegen gushes. “I truly loved it. I wasn’t like an outcast – it wasn’t like that. It was kind of, ‘We’re all together on this film, we’re all working. We’re all doing this and we’re all together to film this movie and make it as great as it can be.’”

In fact, Taegen shares that she learned a lot working alongside such veteran actors. “They really helped me learn how to get into my character, how to really feel what’s going on in the scene like, ‘Okay, this is what’s going on – let’s picture it. Let’s think into Ashley. Let’s really picture it,’” she says of what she’s learned from Olivia and Shea. “They always rehearsed lines in the scene beforehand with me. They’re like, ‘Okay, maybe we could try it like this or this.’ It was great. It was so awesome being able to learn from them and then take that on; how to not overdo my acting and keep it calmer, less is more. It was great and I love that I have this new kind of experience to take into my own future acting.”

Filming The Gateway had been an incredible experience for Taegen, one she joyfully shares that she loved.

“It was definitely different from some of the stuff I’ve done,” she admits with a laugh. Noting that she wasn’t present for some of the more gruesome scenes of the film, Taegen says, “There’s a lot of crazy stuff that I didn’t necessarily see and wasn’t there for them filming it, so I just dove into what we’re doing in my scenes. It’s definitely different but I loved it.”

The actress also points out that her character Ashley was one of the first times she was able to embrace a character as her own instead of a shadow of someone else’s development. “It was something of a new thing for me… I got to play my own character. In films I’d done before, I was always playing a younger version or a flashback or just someone that already exists, so this was awesome because I got to portray my own character, explore my character, and develop her and really dive into her. I love that.” 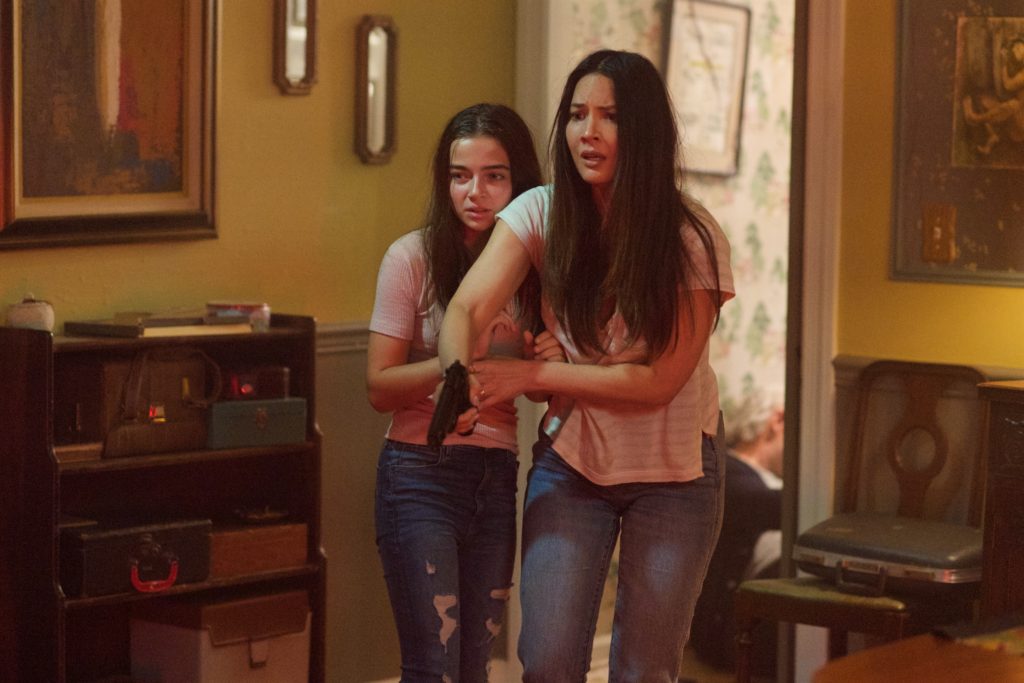 The Gateway explores many issues affecting society like drug trafficking and the occasional inadequate handling of the foster system, as well as the way these issues can sometimes intersect. Taegen hopes that her portrayal of Ashley will help audiences become more knowledgeable of these issues.

“I hope they can develop an understanding of what it is like and how these certain things can affect kids; how we can look into it and how people can learn from it and see how this impacts kids involved in all this stuff.” She adds that she hopes the films resonates with audiences in that they are able to see and take from the film that children are really impacted in these situations.”

On the television side of Taegen’s resume is the wildly popular The Mighty Ducks: Game Changers. Season one of the series premiered on Disney+ earlier this year and shortly after the finale, it was renewed for a second season.

“It was crazy,” Taegen says of the moment, still in awe. “We were all so excited to be able to put on those jerseys and we freaked out when we first read it. I loved being able to be a part of that franchise and take away from the older movies and create this newer thing and see how the older fans and the newer fans react to it. It was great.”

With fans eagerly awaiting season two, they are hopeful to see more of Lauren and Maya’s friendship, one that didn’t come without its own trials and tribulations in the first season.

From her time filming projects like The Gateway, The Mighty Ducks: Game Changers, and The Right Stuff, Taegen has been able to rack up a notable list of co-stars. However, when asked who her dream co-star would be, she gets stumped.

The actress laughs as she admits, “Oh my goodness, I don’t know. I don’t know if I’ve ever been asked that before.” Taking a moment to think it over, Taegen comes to the conclusion that she doesn’t have any specific dream co-star in mind.

I feel like action movies would be so cool to film.

When broached about her dream project, though, Taegen is quick to answer. She starts by sharing that she has different genres she’d like to explore, her excitement at the idea palpable in her tone. “I feel like action movies would be so cool to film,” she starts. “Also, one of my favorite movies is 10 Things I Hate About You and I feel like Julia Stiles and how she played that character is great. [Her character] doesn’t really care about what anyone thinks and I love her character so much. I would like to play that.”

Taegen admits that her two ideas are vastly different from each other but she’s unapologetic. “I loved those both,” she says.

As far as the kind of action film she’d love to do, she isn’t picky. “Action movies would be so cool to film or like a spy [film]! I feel like those are all cool things!”

The young actress was able to get a chance to see what filming an action movie would be like while shooting The Gateway. There is a part of the film where her character Ashley as well as Dahlia and Parker are on the run and find themselves escaping a diner, traversing city streets, and hopping onto a train. “That was fun filming that. That was a lot of running,” she confesses with a laugh. “That was actually the first day we filmed, so we got our steps in for that one!”

The smile is clear in Taegen’s voice as she recalls filming the action-packed sequences for the movie. “We filmed the running scenes in different parts. We’re not continuously running but we did run a little bit.” To prepare for the scene by getting into character and making sure they seemed constantly out of breath, Taegen shares how she, Olivia, and Shea did it.

“Beforehand, we all did jumping jacks and pushups so we’re already kind of out of breath so it’s not completely fake. We got into that a little bit and then we ran and it was pretty crazy. That was my first kind of take [like], ‘Okay, this is kind of like an action film in a way – all this craziness going on.’”

With The Gateway out now, Taegen is looking next to the second season of The Mighty Ducks: Game Changers. Although she’s not sure when they will start filming, she is excited for what’s to come.

Taegen has amassed quite a following already during her time in Hollywood so far. She has dedicated fans from her different projects and is grateful for them all. She sends her thanks to them when TEENPLICITY asks what she would like to tell her fans.

“I’m glad you guys have enjoyed The Mighty Ducks and things that I’ve worked on, and I hope you enjoy The Gateway and future projects that I’m a part of. Thank you so much for everything and supporting me and my projects!”

The Gateway is available in select theaters and On Demand now.

Around the age of 10, Sari Arambulo realized she wanted to get into acting. From hip-hop competitions, voice lessons, and local musical theater growing…