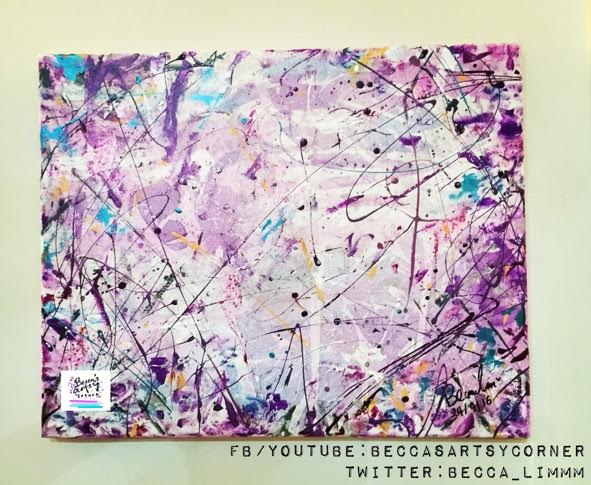 One of the greatest things about art is its lack of restrictions overall. While some mediums or styles have guidelines, there’s no strict rules or ‘rights’ and ‘wrongs’ when it comes to expressing oneself. Some people use music or writing while others use a brush or a pencil to let their creativity flow. For Rebecca, she looks beyond the tools usually at her fingertips to create her art.

Best known on Instagram as ‘beccasartsycorner’, the 18-year-old got recognition due to her paintings of her favorite celebrities. However, they weren’t just any paintings – they were done with nail polish.

Although she’s been drawing since pre-school, Rebecca has only been creating nail polish art for around four years. “First, I either use acrylic paint/mural paint as the background,” she says, describing the process for each piece. “After adding layers and layers of colors using either nail polish, watercolor, or acrylic paint, I will finish the artwork with a final touch of nail polishes.” 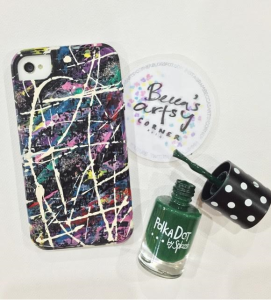 The idea of using nail polish to paint came to Rebecca after watching an episode of “The Carrie Diaries”, as well as her mother’s influence. “My mother sells her own brand of nail polish range known as Polka Dot by Splassh,” she says, “so I had an abundance of nail polishes at home to use for my paintings.” In fact, many of the bottles shown in each of her pieces are from her mother’s brand – hint: look for the caps with polka dots on them! She uses around 10 to 15 different nail polish colors for each painting.

Having so many bottles of nail polish at her disposal made creating her first piece easy.

“My first nail polish piece was on an iPhone cover,” Rebecca recalls. “I received a black phone cover and didn’t like how the cover was so plain so I decided to use some nail polish to add some color to it.” When she’s looking back at this first piece, and compares it to her talents and creations of today, the young artist says, “I learned that it does not matter when some people do not appreciate your art because there will be other people who do.” Rebecca even gives a special shout out to her dedicated supporter base. “I am extremely thankful to people who followed me on Instagram/Facebook for appreciating my artworks. It really means a lot to me in motivating me further to improve my skills.”

When Teenplicity asked Rebecca if there were any pieces she’d like to recreate in the future, she explained two that stuck out to her most. “I would really like to recreate this painting in the future,” she says of the checker and chess board. “I would make the squares smaller and add more details to the flowers.” The other piece she pointed out is the nail polish painting of Victoria Justice, created this past August. “I was really happy when Victoria actually commented and liked one of my artworks of her because I have been a fan of her show ‘Victorious’. I did think this painting was nice but I was really happy when she saw it!” exclaims Rebecca. 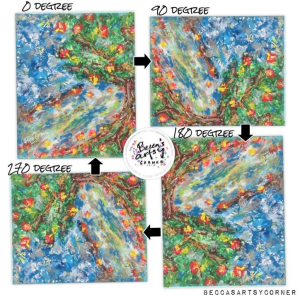 Picking a favorite piece of hers is a bit harder. “I actually have a few favorite art pieces,” she reveals, “but my favorite art piece would be this painting titled ‘Eye of the Tiger’. This piece was my very first painting on a big canvas and the very first time I started to paint on a canvas instead of paper,” Rebecca says of her 2013 creation. “My second favorite art piece would be a painting with a mixture of a nail polish and acrylic paint. This is because when I was painting this art piece, I did not plan on painting a reindeer. However, after finishing this art piece, I realized that there is a silhouette of a reindeer right in the middle of the painting.” In this one of Rebecca’s abstract painting, her followers are sometimes asked if they can spot the other hidden animals in the painting, one follower even saying that they saw a dolphin.

“Finally, my third favorite painting would be the ‘4 Faces Trees’. This is because there’s four different faces when you rotate the painting to the right and to the left,” she explains, even turning the painting for Teenplicity. 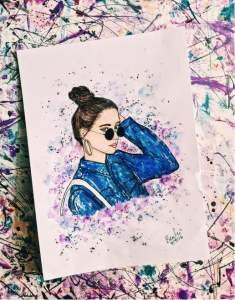 “Lilimar from Bella and the Bulldogs.” – Rebecca

Many of Rebecca’s other pieces are her portraits of various celebrities. This has garnered her attention from not only their fans, but many of the celebrities themselves.“The coolest part was receiving compliments from people you have never met before and being followed by people who I do not personally know. The first celebrity who reposted my artwork of her was Jenna Ortega,” she gushes. “I was quite surprised that she actually replied [to] me when I asked her what phone she was using so that I could send her one of my nail polish iPhone covers that I designed.” Rebecca goes on to say, “I was really excited when Rowan Blanchard liked my Facebook page and shared my painting of her because I was a huge fan of her show ‘Girl Meets World’ and also when Lilimar followed me and reposted my painting of her. I was so happy that she liked my artwork of her!!” The talented young artist even expressed her joy over Bailee Madison being the first celebrity to make her artwork their profile picture, calling it really cool.

“I was also very excited and honored when Lizzy Greene asked me to draw her,” she says, continuing on to share her happiness when Chandler Kinney and Isabela Alexander followed her on Twitter. “[They] noticed the artworks that I painted of them. I have many other favorite ones but these are some of my favorite interactions.”

Considering the magnitude of interactions she’s had because of her art pieces, Teenplicity couldn’t help but ask if there were any reactions that were her favorite as well. Scrolling to the comments section of quite a few portraits, celebrities have enthused their love as well as liked the photos.

“I have so many favorite reactions,” begins Rebecca before pointing out Bree Bassinger [‘Bella and the Bulldogs’], Madisyn Shipman [‘Game Shakers’] and Victoria Justice [‘Victorious’, The Rocky Horror Picture Show]. “I was a fan of ‘Bella and the Bulldogs’ so I was really excited when I received a notification on Instagram from Bree! She commented on one of my artworks of Taylor Swift. I was also really surprised to receive a Twitter notification from Maddie Shipman. I was so happy she liked my painting of Hailee Steinfeld.”

Nail polish isn’t where her artistic talent stops. In addition to drawing, Rebecca uses other mediums like oil paint, soft pastel, acrylic paint, and watercolor paint to express herself. Some pieces have made it to her Instagram page. She even admits, “Although I tried pottery making in school, I’ve never tried sculpting before but would love to try it one day.” She cites the most difficult part when creating a piece comes when she has to think of which colors would be suitable together or which type of brush to use.“Art is definitely something I would like to continue pursuing in the future,” Rebecca answers when finally asked that fateful question. “Being able to express myself freely without any restriction or rules is what makes me enjoy painting.”

In addition to practicing her art in the future, Rebecca is planning to pursue a degree in law, citing that she would do so if she gets into University this year.

“I really hope to inspire people through my art and to have my artworks featured in art museums one day,” says the young artist of her future hopes. “Also, I really hope that Taylor Swift will notice my artwork of her one day because I have been a fan since 2010.”

Be sure to check out the gallery of her pictures below!