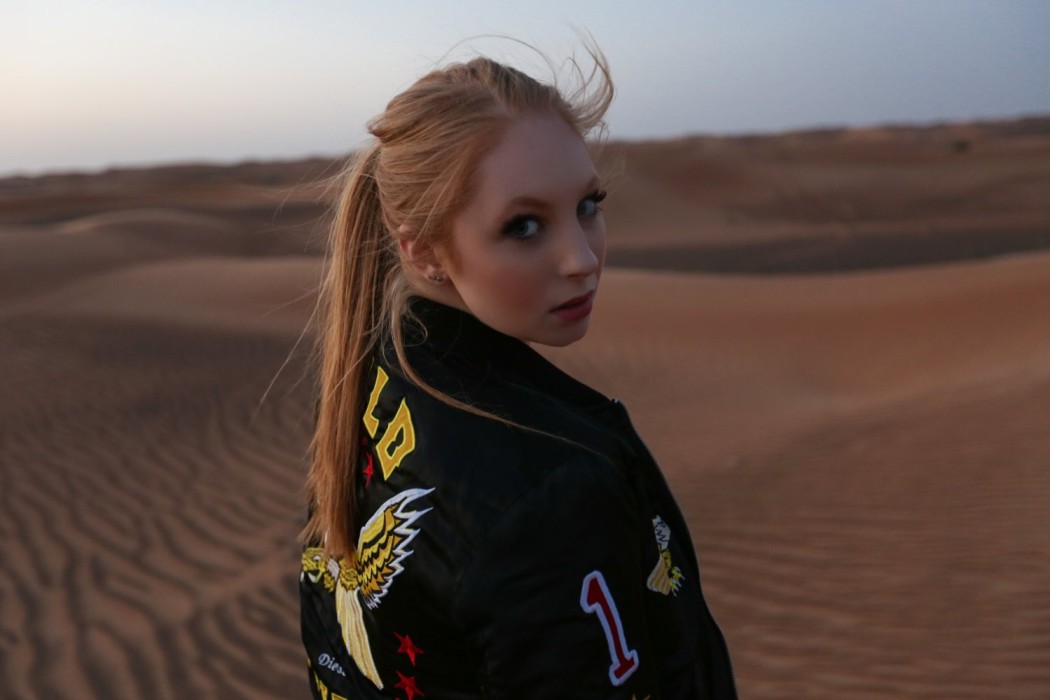 “[‘This Just In’] is just so different,” she says of the show in comparison to “Great Big World”. Elizabeth confesses, “I’ve never done a pre-scripted TV sitcom before in my life. I say that I grew up under a camera my whole life, so I’ve been pretty comfortable with it, being on ‘Great Big World’. But this has been so different and I’ve had such a fun experience doing it.”

The young actress explains that while both shows are different, it was cool to bring in a hosting aspect to her character Liz. “I got to bring in a little bit of myself.” With a laugh, she says, “I’d say the character’s really, really like me in real life! So it’s been fun tying the two together a little bit in a weird way.”

For anyone that is familiar with Elizabeth’s Instagram page, or her “Great Big World” series, the young woman travels the world and explores different destinations with a variety of her celeb friends. However, her new television series brought her together with a great group of people she didn’t know beforehand.

“Our cast, I can genuinely say, we are all best friends,” she enthuses. “We hang out outside of work all the time, we’re in quirky group messages. We are extremely close and we get along so well. It’s been a really great time.”

Elizabeth’s character in “This Just In” is new to school and in addition to joining the A.V. Club, she’s just trying to navigate high school and make friends.

Describing Liz as a super quirky girl, Elizabeth goes on to say, “She’s pretty nerdy but she always sees the best in everyone and she’s always looking to make things better.” The actress can’t help but let amusement drip from her voice as she says with a smile, “Liz – I feel like is always going through something! Whether it’s problems with her brother, she finds a new love interest… She just always wants to make everything the best it could be and she always gets herself in these crazy adventures. It’s pretty funny alone the way.”

One crazy adventure in particular is finding herself pit between two of her best friends during a school election. When Liz and her friends find out that Becca is planning to run for president in the school election, they try to convince Abby to run against her in order to prevent the dictatorship Becca is sure to instill. Throughout the episode, Becca tries to bring down others by calling them nerds or acting like they aren’t important.

“When I was younger, I was always bullied in school,” Elizabeth reveals. Her advice to other girls who have to deal with mean girls is to just be themselves no matter what. “I know that people can be mean sometimes but you shouldn’t change who you are based on what people think. I feel like in the show Liz Sandler, even though Becca isn’t the nicest sometimes, [Liz] never really changes herself and I feel like that’s a really good message for young girls.”

In fact, Elizabeth even embraces the once-used insult of nerd.

“I embrace that title!” she exclaims, the smile clear in her voice. “I consider myself to be a big nerd.” While Becca says it as an insult on the show, the world-traveler feels that the character actually has a lot of insecurities and uses the name-calling as a way of bringing others down. She says of people who want to embrace these words instead of the insult they were once intended to be, to do so. “I would tell people who want to take that as themselves like do it, be a nerd. Be a nerd with me!” she finishes with a laugh.

“I hope someone asks her to a dance,” Elizabeth says enthusiastically with a laugh when Teenplicity asked her what she hopes her character will experience in high school that she never did. Fingers are crossed that it’ll be Austin who will do the asking. “You guys will see,” she says with a small laugh. “I’m not going to give away anything that may or may not happen!”

The actress explains how she went to the same school for 13 years and that experiencing life as the new girl through her character Liz is funny but hard. “Just really how she tries to fit in because she just wants people to like her but she never changes herself,” she explains. “She’s very personable and I feel like everybody pretty much likes her.” Except for Becca, she had added with a laugh. “Becca grows on me for sure!”

“I’m just excited for fans to see the whole bonding of all the characters and the new characters who come in,” Elizabeth says of what she’s excited most for fans to see. “It’s been so much fun for me to see some of the episodes and I know my whole cast is so excited. It’s been like a whole roller coaster of events and I’m just excited to see what people’s reactions to our characters – if they like it. I hope they do!”

Elizabeth thinks for a moment before deciding on three words to describe the show. “Friendship, funny, and adventurous.”

While “This Just In” only has a few episodes in February, “Great Big World” is still airing brand new episodes, the latest about St. Petersburg. Elizabeth reflects back at her time when she used to film while in high school. “Traveling and doing schoolwork was an issue but usually I did traveling during my breaks,” she explains.

“Traveling’s made a huge impact on my life.” She explains, “How the whole ‘Great Big World’ started was I traveled to Africa, years ago now that I think about it, and I saw all the underprivileged children and I really wanted to make a difference in the world and bring awareness to kids my own age. I got involved with a lot of different charities and that really changed my life and how I see the perspectives of things. I definitely feel like traveling changes the game. I feel like I can relate to so many more different cultures and understand things. I truly love it and I truly love getting to experience different cultures.”

In the midst of all her traveling, Elizabeth was still able to have a major 16th birthday party while in high school – which had benefited Toys-4-Tots. Her heavy involvement with charities is something she hopes will inspire her fans. “I hope that maybe they can get involved too because I know especially around the holidays it can be so hard for people – that’s why Toys-4-Tots is my favorite charity to work with over the holidays because I really think that every kid deserves a toy for Christmas.”

Even though her 16th birthday was only five years ago, Teenplicity still asked what piece of advice she’d give to her 16-year-old self.

“My advice to my 16-year-old self is honestly be who you are and don’t pretend to be anybody else because people will like you for you and you don’t want people to like you for your fake self because those won’t be your true friends.”

As a fun question to end the interview, Elizabeth answered which character from “This Just In” she’d like to travel the world with.

“Maybe it’d probably be Abby,” she enthuses. “She’s so quirky in the show that she really just sees things that other people don’t usually see and she’s just making light of every situation. She has the craziest ideas and I feel like she’d be so much fun to go with!”

Be sure to tune into “This Just In” on Saturdays on Pop TV and find out where to watch “Great Big World” here!

Adventures in Babysitting with Jet Jurgensmeyer

At the young age of 11, Jet Jurgensmeyer is living the dream. A star on both Disney Channel and Nickelodeon, Jet’s resume also boasts…